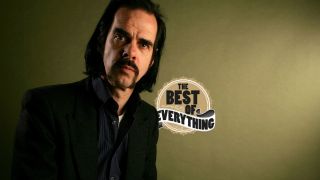 My introduction to Nick Cave came fairly late I guess, as far as being introduced to bands goes. I didn’t really find him until much later in life, when I was well into my 20s.

He tends to elude the younger generations to be honest, and that’s probably down to the subject matter in his music. But as far as impact goes, I don’t think there’s been anyone else that’s had the same sort of impact on me personally.

Lyrically, he’s the greatest. He also has an incredible ability to take a pop sensibility and turn a song that you don’t really want to listen to into one that you can’t stop listening to. And I just love the ever-changing flow of who he is as a person, and how he attacks his art. It’s incredibly honest, and he just leaves it all out there.

He’s a very special person, and it’s ridiculous how many great songs he’s done. I’m going to keep my list to less than 10, otherwise I won’t be able to stop and we’ll be here forever.

THE MERCY SEAT (Nick Cave and the Bad Seeds, Tender Prey, 1988)
We’ll start with probably the ultimate Nick Cave song, which I think would be The Mercy Seat. I don’t want to say too much about it, because I think it’s best if you just listen to it and sort of see what it says to you. I’ve only ever seen him live twice – both times on his last tour – and he played this song unaccompanied, just him on the piano, and it was fucking phenomenal. And we probably shouldn’t have done this, but this song was part of the inspiration for my daughter’s name. My wife and I took two of our favourite Nick Cave songs and put them together, so my daughter’s called Mercy Rose, after The Mercy Seat and Where the Wild Roses Grow, which is the next song I’ll talk about.

WHERE THE WILD ROSES GROW (Nick Cave and the Bad Seeds and Kylie Minogue, Murder Ballads, 1995)
As far as duets go, it’s incredibly haunting and incredibly dark, and it’s probably her best work ever. As far as stories go, it’s very beautiful and very sad. Musically speaking, I began to look at everything differently after I heard this song. It’s a true pop collaboration, and one that you wouldn’t expect. And it shows that if you have the right artists who trust each other, you can make truly amazing art.

NO PUSSY BLUES (Grinderman, Grinderman, 2007)
This is one of my favourite songs ever. ‘I read her Eliot, I read her Yeats’, and when he starts on that little rant where he says, ‘I petted her revolting little Chihuahua’ – you can’t come up with lines like that unless you’ve lived it. It’s a song about frustration, and we’ve all been there, but he comes at it from such an interesting angle. Every song he’s ever written is done so perfectly, but this one especially is just perfection. And when it drops in and explodes with the chorus of ‘I’ve got the No Pussy Blues!’, it’s out of this fucking world.

THE SHIP SONG (Nick Cave and the Bad Seeds, The Good Son, 1990)
What a fucking song! It’s genius. We could just sit here and have a hug and watch Nick Cave videos all day long. He’s so, so special. They don’t make them like this anymore. The lyric ‘Come sail your ships around me / And burn your bridges down’ has inspired so many of my songs. I listen to his music incessantly. My wife loves him. I love him. And when you start reading his lyrics, it can take you to a whole different place. Whenever I read my own lyrics back without context or music I always think, ‘Fuck, I must do better!’ But that’s something I’ve never had with Nick Cave. He’s incredibly poetic, and he always inspires me to be better.

WORM TAMER (Grinderman, Grinderman 2, 2010)
Let’s do another Grinderman song. Worm Tamer is fucking ridiculous. It’s disgusting. And the music to it is some of my favourite music ever made. It’s eerie and frantic, but also laid back, and the hook is right there. After that initial moment where you’re feeling a bit sickened, you’re in, and you get in this groove where he’s just relaying over and over these sexually perverse lyrics. He’s untouchable in my eyes.

STAGGER LEE (Nick Cave and the Bad Seeds, Murder Ballads, 1995)
I would say if you haven’t heard Nick Cave - if for whatever reason he’s passed you by – then buy Murder Ballads before you buy anything else. And just give it a listen, because everything on there is really, really special. ‘And I’ll crawl over fifty good pussies just to get to one fat boy’s asshole’ is probably the greatest lyric of all-time. I said in an interview once that it was my favourite lyric ever, and the guy interviewing me was a young kid. He was like, ‘Who wrote that? That’s awful.’ He went grey and he looked genuinely disturbed. But art is supposed to make you feel something. That’s what I love about his songs. He’s able to take myths and make them reality. And let’s take that to the next song, which is probably the greatest Nick Cave song ever written: Red Right Hand.

RED RIGHT HAND (Nick Cave and the Bad Seeds, Let Love In, 1994)
In painting this picture of a place and a man, as far as song writing goes, this song has always resonated with me in a way that’s similar to when you walk into a museum and you first see a Caravaggio [16th century Italian painter] painting for the first time. It’s during moments like that you realise you will never make anything as good as that in your life, and it’s incredibly humbling. When I listen to Red Right Hand, I’m reminded that I’ll never write a song this good, but I’ll keep trying until the day I fucking die. He just has a way with words that creates the kind of picture that you can’t escape from, and that’s why I’ve always loved his writing so much.

THE WEEPING SONG (Nick Cave and the Bad Seeds, The Good Son, 1990)
This is partly a duet – in ways. It’s also probably one of my favourite music videos of all-time. It’s him and the boy [Blixa Bargeld] in a water tank in some studio somewhere, rowing for their lives. It’s incredibly moody, but also so powerful. Every one of his songs that he’s ever written has that power to them. When you hear them for the first time, even if you don’t like them, they’ll stay with you. I’ve always loved that about his work. It’s unforgettable.

RATHER LOVELY THING (Nick Cave and Warren Ellis, The Assassination of Jesse James by the Coward Robert Ford OST, 2007)
We should talk a bit about the soundscapes that he creates as well, particularly with the soundtracks that he does. He obviously writes films, and The Proposition [Dir. John Hillcoat, 2005] is unbelievable. You can just watch the film and it’s a great film. But I also listen to the soundtracks that he writes for films whilst I paint, and there’s a song called Rather Lovely Thing on the *Assassination of Jesse James *[Dir. Andrew Dominik, 2007] soundtrack that’s so unbelievably haunting. There are moments in there that are both incredibly beautiful, and incredibly bleak. When you listen to all of his music, but specifically the soundtrack stuff, it puts you in a place where you understand what he’s trying to say, but also what he can’t say. His music, in a way, actually tells you all the things that he can’t find the words for. I’ve always loved that about him, and that’s what we’ve been trying to do a little bit of in the Rattlesnakes. I’ve been more in control of this project musically, and that’s an element that I’ve always missed having being at the mercy of the band that I’m in. But this time I’m very much directing how the songs are structured. We just put Blossom out earlier this year, and the last song on there is a 12-bar blues song [I Hate You], because we wanted to write one. And that’s the way we’re going to continue to write. So this band is my Bad Seeds really. It’s my moment to be me and try to find out who I am as an artist, because I’ve been struggling with that for a long time. Now is my time. And fingers crossed, I can find out whether I’m up there with Nick Cave or not.

Frank Carter was talking to Matt Stocks. Frank Carter & The Rattlesnakes’ album Blossom is out now through Kobalt Label Services.

The Best Of Everything