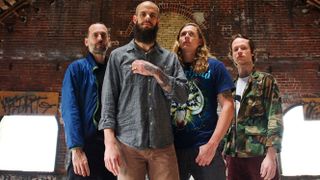 Baroness have released a live video of showcasing their track Try To Disappear.

The song originally appeared on the US outfit’s fourth album Purple, which launched in 2015 via Abraxan Hymns.

Last month, guitarist and vocalist John Baizley, who also designs the band’s album covers, revealed that drawing helped him recuperate following the tour bus crash which left him with an arm injury so severe that doctors considered amputation.

He told TeamRock: “I could create and think quietly about what I’d been through and it wasn’t as bleak or dark as it would be otherwise.

“I realised that it had probably always helped me. All the demons I have are most easily put at bay through the creation of songs and art.

“I can pour the worst thoughts, feelings and ideas into it and I don’t have to struggle against them in other ways.”

Baroness are currently on tour in support of Purple across the US. They’ll then head to New Zealand and Australia for a run of dates in December.

The 10 best album sleeves according to Baroness' John Baizley