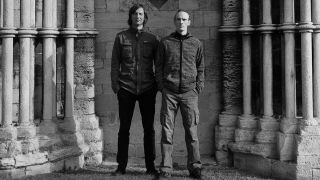 My Soliloquy have premiered their video for new track Fire In The Blood exclusively with Prog.

The song has been taken from the band’s latest album Engines Of Gravity, which launched in September, with the group formed and fronted by ex-Threshold man Pete Morten.

Morten exclusively tells Prog: “The song is written from the view point of an individual who has strong fundamental religious beliefs. But, beliefs and teachings that directly conflict with how our character relates to their own human sexuality.

“It’s only after experiencing an enlightenment of sorts, that our character comes to understand the oppressive nature of the religious conditioning they were born into.

“Pertinently, they reach the understanding that human sexuality is something to be celebrated and cherished, not shamed.”

He adds: “For thousands of years, societies have had, and continue to have, some very peculiar ideas of propriety, surrounding human sexuality. Ideas that have all too often clouded sex in shame, embarrassment and guilt.

“This song is an observation of those misguided attitudes and how such skewed perspectives, has led to all manner of warped ideas surrounding sex, to say nothing of the countless atrocities perpetrated against women, in the name of certain religious teachings. Most alarmingly, we still see this happening in countries and societies, to this day.”

Engines Of Gravity is available to purchase directly through the band’s website. Find the cover art and tracklist below.

My Soliloquy Engines Of Gravity tracklist

Our TeamRock+ offer just got bigger. And louder.