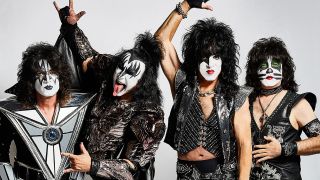 Kiss have announced a further 25 dates on the North American leg of their End Of The Road tour.

Paul Stanley, Gene Simmons, Tommy Thayer and Eric Singer previously revealed a run of shows that will take place between January and July in the US, Canada, Russia, Europe and the UK.

Now they’ve revealed that after a brief rest following their show in Glasgow, Scotland, on July 16, they’ll head back out on the road from August 6 through September 16 for more concerts across North America.

Kiss announced their intentions to rock the world one last time in September while appearing live on the season finale of America’s Got Talent.

They later said: “All that we have built and all that we have conquered over the past four decades could never have happened without the millions of people worldwide who've filled clubs, arenas and stadiums over those years.

"Kiss Army, we're saying goodbye on our final tour with our biggest show yet and we'll go out the same way we came in... unapologetic and unstoppable."