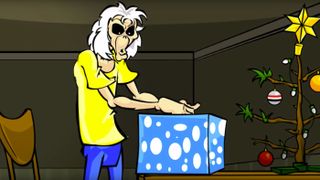 A fan has used Iron Maiden’s track The Book Of Souls to soundtrack an animated Maiden-themed Christmas video.

Val Andrade’s clip is called A Christmas Cheers 2 and featured a story centred on Iron Maiden’s mascot Eddie. It’s set to the title track from the band’s recent album The Book Of Souls.

Andrade has also released an animated video for Maiden’s track The Wicker Man. Both can be viewed below.

Iron Maiden recently wrapped up a world tour in support of the album and the band issued a Christmas jumper featuring a festive Eddie.

They are in good company when it comes to getting into the holiday spirit. Guns N’ Roses have released a particularly striking Christmas jumper, while Spotify have sent Korn Christmas decorations to fans.

And The Dillinger Escape Plan, Between The Buried And Me, Every Time I Die, August Burns Red, Cro Mags, Sikth, Bury Your Dead, Stick To Your Guns and Tesseract recently unveiled their own sweaters on Merch Limited.

Meanwhile, holiday jumpers from Architects and Thy Art Is Murder are also available via Impericon.

The Melvins recorded a cover of Carol Of The Bells while Halestorm released their take on AC/DC’s Mistress For Christmas. Meanwhile, Psychostick gave System Of A Down’s B.Y.O.B. a festive overhaul.

TeamRock’s previously-announced Heavy Metal Stickers Pack for iOS 10 has been given a Christmas update and a special Christmas offer is still available for a heavily discounted subscription to Classic Rock, Metal Hammer and Prog magazines.