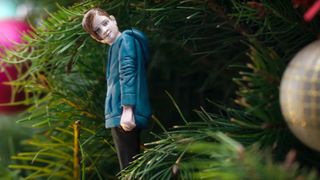 Spotify have revealed a Christmas present for the streaming service’s most active Korn fans.

They’ve created a collection of seasonal decorations – which they’re calling “Kornaments” – based on the artwork for the band’s latest album The Serenity Of Suffering.

The limited-edition souvenirs are to be delivered to those who’ve streamed the most Korn tracks over the past year.

Jonathan Davis and co are currently touring the UK in support of the follow-up to 2013’s The Paradigm Shift, which was launched in October.

The frontman recently said of the band’s writing process: “I need to have a song completely done. I guess I’m a little diva when it comes to that stuff – it dictates what I’m going to be feeling, emotions, everything. I need that.

“Once the music is all done, I know exactly where to place my vocals and fill the holes and do all of that to make it work. I guess it’s backwards.”

Ahead of the first UK show, bassist Reginald’ Fieldy’ Arvizu and drummer Ray Luzier surprised British tribute band Korn Again by hitting the stage and performing two tracks alongside them.