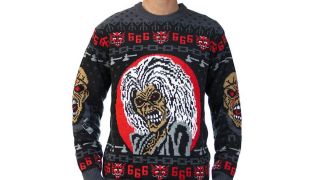 An Iron Maiden Christmas jumper and scarf have launched in time for the festive season.

Alternative fashion brand Middle Of Beyond are the firm behind the officially licensed items.

The sweater is 100% acrylic and is available in black, dark grey, light grey, red, tan, and white colours. It’s decorated with the band’s mascot, Eddie, and bears a repeat pattern. The scarf is also 72 inches in length and seven inches wide.

The jumper can be purchased for $85 and the scarf for $40 on the company’s website.

Iron Maiden are the latest in a range of big rock acts to jump on the festive knitwear bandwagon. Foo Fighters unveiled a jumper featuring a black metal gingerbread man in 2014. Guns N’ Roses, Slayer and Metallica have also put their name to a range of “ugly Christmas sweaters” in the past few years.

The band announced a further European leg of their Book Of Souls World Tour for 2017 in September – with a string of UK shows included.

Shinedown will be the support act on all 16 dates.

Iron Maiden bassist Steve Harris said: “As it’s been so long since our last full UK arena tour, we really wanted to get to our fans in as many cities as possible.

“The whole band is really enjoying this tour and although we love playing festivals and stadiums, it is terrific to return to the intimacy and atmosphere of arenas.

“The songs from The Book Of Souls album and the new Maya-themed Eddies and stage sets have gone down really well and fan reaction has been amazing.

“And of course we know our fans appreciate us playing a lot of the older songs too, which we will continue to do.”

The Iron Maiden Lyrics Quiz: can you identify the song from the lines?