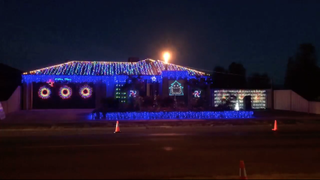 A video of a stunning AC/DC-themed Christmas lights display in Australia has been shared online.

Greg Jaeschke, who lives in Rudd Road in Shepparton, Victoria, has honoured the Aussie rock veterans with the festive feat – in which the lights flash in time with their song Thunderstruck.

Spectators can tune in to a special radio station, 106.0FM to listen to the music while watching the show. Jaeschke says a new song will be added to the playlist for the display each day until Christmas Eve.

He says it took 280 different light channels this year, telling Shepp News: ‘‘It does take quite a bit of effort – last year it took me about six hours to do each song.’’

Jaeschke isn’t the first to create a hard-rock themed Christmas spectacle. A metalhead in Southern California also previously rigged up tributes to Slipknot, Disturbed and Slayer with his own light set for the holiday season.

Meanwhile, Prince has been honoured in a Christmas lights display close to the late musician’s Paisley Park estate. It features purple neon lights, a rotating Prince symbol and a screen showing images of the musician.

Among a host of traditional Christmas songs used in the show in the city of Chaska, Minnesota, they’ve included his trademark track Purple Rain.

The AC/DC 'True Or False' Quiz: can you separate fact from fiction?