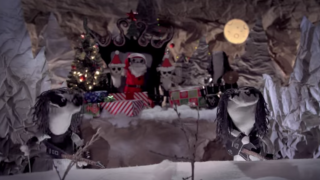 A still from the Immortal sock puppet video

Following on from last year’s The Summoning and Immortal Christmas in 2014, Inquisition shows a sock puppet version of the Norwegian metal band requesting an unexpected gift from Santa Claus – in their signature musical style.

They said: “This will be our darkest and coldest album in a long time – with massive majestic riffs, grim frostbitten vocals and tales from our mighty realm. Fast and furious tracks, epic tracks and longer playtime than any of our previous albums.

“The last year we have completed all the new songs and look forward to record our most passionate album in a long time. The songwriting process has been awesome and we are soon ready to start the recordings.

“In a time when true and origin Black Metal is nearly dead, the band is in ultimate spirit. After the last year’s incidents, it was time to go back to the roots to what this band is really about musically, and also to take the integrity of the band back to where it belongs.”

Further release details will be available in due course.