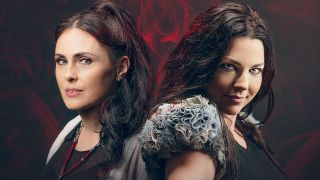 Last month, Evanescence and Within Temptation were forced to postpone their co-headline European tour.

The run of shows was originally due to get under way in Brussels on April 4, but with the world of music in turmoil due to the coronavirus pandemic, those plans had to be shelved.

However, the Worlds Collide tour will now take place throughout September and into October, kicking off at Glasgow’s SSE Hydro on September 2 and wrapping up at Madrid’s Palacio Vistalegre on October 1.

A statement reads: “All existing tickets and VIP packages will remain valid for the rescheduled dates and all venues remain the same – except for Hamburg and Frankfurt.

“The Hamburg show will move to the Barclaycard Arena – all tickets will be honoured at the new venue and extra tickets to this show will be on sale immediately. We expect to have an update on Frankfurt shortly.”

Evanescence have been in the studio working on their new album, with the first material from it due to arrive later this month on a date still to be confirmed.

Within Temptation are also working on new material, which is expected to be released to coincide with the new tour dates.