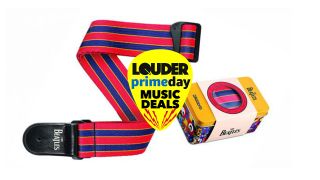 Amazon Prime Day 2019 is in full swing and there are loads of deals on music-related gear to be had. If you're a guitarist and a Beatles fan, right now you can take your pick of seven official Fab-Four branded guitar straps and enjoy up to 62% off each one.

There are various styles to on offer – from Yellow Submarine and Sgt Peppers to The White Album – and they're all made to attach securely to your guitar and provide hours of riffing comfort. We can't guarantee they'll help you play more like George Harrison, but you'll look good trying.

Anything Beatle-related is going to be popular, so get your order in before they sell out or when the deal expires at 19.45 on Monday.

D'Addario Yellow Submarine guitar strap and tin (Ringo)
Was, $29.99, now $22.79
This limited edition woven guitar strap is an homage to Ringo's illustrated look from the film in a collectable tin featuring art and characters from the movie.View Deal

D'Addario Yellow Submarine 50th Anniversary collectible guitar strap and tin (John): Was $29.99, now $22.79
Originally released to celebrate the 50th anniversary of the band's most colorful album and movie, this woven strap is based on John's look in the film.
View Deal

Sgt Pepper's vinyl guitar strap: Was $57.20, now $25.09
It was 50 years ago today... ish. Originally released on the 50th anniversary of the epoch-defining album, this suitably colorful strap is a snip at this price...View Deal

Another Sgt. Pepper's guitar strap: Was $57.20, now $25.09
... or you may prefer to go for this slightly more restrained tribute to the long player that launched a thousand concept albums.View Deal

Meet The Beatles guitar strap: Was $33.56, now $25.51
And to finish off, let's go back to the beginning (almost) with this strap-tacular tribute to the Fab Four's US-invading second album.View Deal