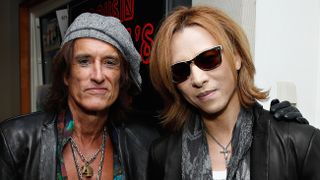 Aerosmith guitarist Joe Perry and X Japan mainman Yoshiki are the latest stars to be added to the incredible lineup for this week’s Classic Rock Roll Of Honour in Tokyo.

And Perry’s involvement means he will join his Hollywood Vampires bandmate Johnny Depp, who was confirmed as one of the guest stars this week.

The awards show takes place at Ryogoku Kokugikan Stadium in Tokyo, Japan, on November 11 – the first time the event has been held in Japan.

TeamRock has joined forces with KLab Entertainment and Parallel Contemporary Music for the event.

TeamRock Managing Director Tony Dowling says: “As if the Classic Rock Roll Of Honour wasn’t already jam packed full of some of the best talent on the planet, we’ve only gone and added Aerosmith’s iconic guitarist Joe Perry and X Japan drummer Yoshiki – one of the very biggest musical stars in Japan.

“It seems everyone wants to be involved in the biggest rock party of the year and we’re delighted to have them all onboard. With all of our musical guests also scheduled to perform at the event, anyone in attendance is guaranteed a night that they will never, ever forget.”

Jeff Beck will be given the highest honours on the night and he has announced that he will be assembling his own special band of musicians for the event.

He will also be joined by guitarist Tommy Henriksen, of US-based supergroup Hollywood Vampires, and Korn drummer Ray Luzier.

Tickets for the event are available now.