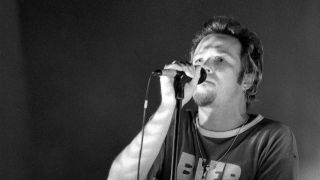 By the spring of 1994, Stone Temple Pilots had notched four million sales of their debut album Core yet found themselves dismissed as the grunge scene’s arch opportunists; lambasted for claiming a place alongside the kingpins of the Seattle explosion, but coming from San Diego.

In the eyes of their detractors – and there were many – this was all too convenient. Although the band tried to draw the positives from the situation, being hailed as the Best New Band of ’94 by the readers of Rolling Stone but also its Worst New Band by the same magazine’s critics is bound to screw with your head.

While out on the road on a 14-month campaign for Core, the group had written an even more colourful and inventive set of songs. With these they were confident of making a follow-up album big and important enough to free the band from the ‘grunge’ tag. (No one knew, of course, that Kurt Cobain would blow his brains out two months before its release, bringing the era to a permanent end.)

“People sometimes talk about the curse of the sophomore slump, but we didn’t pay any heed to that,” bassist Robert DeLeo remarks casually of their second album, Purple. “We knew that the songs we had were pretty special.”

One of these new tunes had been composed by the bassist while sitting in the front passenger seat of a Winnebago motor home in which the group zig-zagged across North America. These origins were appropriate, as the song, Interstate Love Song, became the perfect soundtrack for driving with the window down.

“I wrote it on a nylon-stringed guitar that cost twenty-five dollars,” DeLeo says with a chuckle. “I’ve now got a hundred-and-twenty-five-dollar nylon-stringed guitar,” he adds, whipping out said instrument to play the song’s signature riff in its original form. “It began as a bossa nova tune but I didn’t think people would like that so much, so I added a country riff and a melody I had floating around in my head.”

Although the process only took “around ten minutes”, DeLeo knew straight away that he had come up with something of considerable value. “This was a different level of writing for me,” he acknowledges.

While recording the song for Purple, vocalist Scott Weiland threw in the Interstate part of the title. While the band worked at Southern Tracks Recording in Atlanta, his fiancé Janina Castaneda remained at home in California. Their relationship was on the rocks due to the singer’s hidden yet worsening addiction to heroin, and the words he came up with for it bled out deceit and broken promises.

Each night he would bury his shame and call Castaneda and insist that he was clean. “The words are about the lies I was trying to conceal while making the Purple record,” he later admitted.

“The meaning wasn’t completely obvious, but when you know what the song was about it’s a very poetic piece,” DeLeo says now. “But as a writer, Scott always was very poetic. He also liked to leave the listener to make up their own minds as to a song’s interpretation.”

As with Core, STP retained the services of producer Brendan O’Brien for Purple. “We trusted Brendan completely and the process felt very natural,” DeLeo recalls. “It’s pretty incredible to think that Purple was tracked, mixed and out of the door in just eleven days.”

In an interview from the time, drummer Eric Kretz said: “We would maybe be worrying that a song sounded a little too close to Alice In Chains or Pearl Jam, and each time Brendan talked us out of that.”

“Brendan wasn’t an over-thinker. He was a doer,” DeLeo agrees. “It was a privilege to make records with him, and we certainly were not trying to copy anybody else.”

A quarter-century down the line, those written accusations of his band being Pearl Jam rip-offs now prompt the bassist to give a wry smile. “Such criticism was never really a concern to me,” he says patiently. “We were working with people of Brendan’s stature, and those were the opinions that mattered to me. Everything except the writing and performing of the songs was simply fluff."

However, thanks in part to the success of Interstate Love Song and its sister singles Vasoline and Big Empty, Purple was a massive commercial success, topping the Billboard chart for three weeks and selling more than six million copies.

DeLeo admits that the band’s seemingly instant celebrity became a problem. “I don’t know too many that could handle that type of attention coming at you at such speed,” he says. “We all handled it differently, but safe to say it can be a deadly thing.”

And so it proved. Over the coming years Weiland would be in and out of both STP and rehab. Finally, at the age of 48, following an accidental overdose of cocaine, alcohol and MDA, he was found dead on the tour bus while on the road with his group The Wildabouts in 2015.

Stone Temple Pilots continue to tour and record, and perform Interstate Love Song at gigs. Why not? Sometimes when the going gets tough, the only response is to leap into a car, throw down the top and burn rubber.

Robert DeLeo insists the song still remains valid in the hands of their current lead singer, Jeff Gutt, who joined in 2017 following the death of Weiland’s replacement, Chester Bennington of Linkin Park.

“Playing live is a bit like attending a high school reunion – you snap right back into where you were all those years ago,” DeLeo concludes, returning the 125-dollar guitar to its case. “And you know what? Someday I’d still like to record Interstate Love Song as a bossa nova.”

The super-deluxe, 25th anniversary edition of Purple is out on October 18.