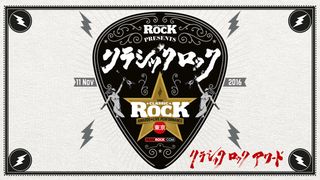 Welcome to the Japanese Classic Rock Awards blog. We posted stories, pictures, insights, videos – anything we could from behind the scenes at this year’s Classic Rock Roll of Honour in Tokyo.

From rehearsals, to photo shoots, to blog posts written, here’s what the Classic Rock Awards 2016 looked like from the inside and out.

Listen to the setlist from the Classic Rock Awards:

Video: Behind the scenes at the Classic Rock Awards in Tokyo

Click the galleries below for pictures from yesterday’s rehearsals in Tokyo.

There’s a pause. Ray has checked his phone and is telling people the news: Trump has taken it. At this point, he doesn’t have the 270 electoral collage votes to take it, but it’s a foregone conclusion.

“Trump is our President?” says Dean.

There is general shock in the room. For a while, Tommy thinks everyone’s winding him up. “How is that even possible?” he says.

Phil Collen’s English accent cuts through. “Have you been to America?” he jokes. “Have you met those people?”

Everyone is either shocked or laughing nervously. “Let’s do Search & Destroy!” says someone. It feels like there has never been a better time to play the Iggy classic.

Their version is muted. Phil Collen has been singing, but he doesn’t take to the mic for this, singing the words almost to himself: ‘I’m a runaway son of the nuclear A-bomb/I am the world’s forgotten boy/The one who searches and destroys’.

In the end, maybe the songs they run through with Joe Perry are more appropriate. Two songs previously covered by Aerosmith: Train Kept A Rollin’ and Come Together.

The train keeps a rollin’ and there’s no getting off now.

In studio B, Rudolf Schenker is running through Rock You Like A Hurricane and No-One Like You with the house band: Dean and Rob DeLeo, drummer Ray Luzier and guitarist Tommy Hendriksen.

They are nailing it. There has been a load of nerves, fraught meetings and difficult times in the past few months putting this bill together. Hearing this, you realise things are going to be alright.

Fuck that. Better than ‘alright’.

Rudolf Schenker: “So. Shall we do both songs?”

Andy Hipkiss is TeamRock’s Artist Liaison and the guy who, with Ross Halfin, has put this bill together. Andy plays it cool. We definitely want both, are you kidding? “We have time to do both,” he says.

Rob DeLeo laughs: “You didn’t come all this way to do one, did you?”

That’s that sorted then. There is only one thing left to do and that’s choreograph the windmilling at the end.

They run through the ending of Hurricane and Schenker shows them how to do it. He does a burst of 10 manic windmilling arm swings.

“I don’t want you to hurt yourself though,” jokes Rob. “Promise me.”

Schenker windmills furiously. They have three guitarists, he reasons, so they have to do it three times. “30 times!”

Dean mouthes it to himself “30 times!” like “I used to be in Stone Temple Pilots – what the fuck have I got myself into here?”

Schenker keeps on windmilling. By the time he’s finished it looks like Trump has won. I don’t want to be the one to break the news. Let’s keep the real world out of this room as long as possible.

Well now. This is how rumours start…

Yoshiki is one of Japan’s biggest rock stars. He played at the Classic Rock Awards last year when it was announced that it was coming to Toki-okiyo. So it seemed only polite to have him play this year too…

Stories From The Awards #4: Phil Lynott’s mum steals the show

Getting Phil Lynott’s mum Philomena to the awards in 2006 required a level of negotiation that made the Middle East peace talks look like, I dunno, something easy.

If all that left us wary of Philomena, it disappeared as soon as she arrived looking like an old Hollywood star and making a beeline for the wheelchair-bound Frankie Miller.

For Phil’s award, Scott Gorham delivered a touching reminiscence on his old bandmate and then Philomena stole the room with the most talked about speech of the night, ranging from the revelation that the first place she’d take the award would be to Phil’s grave (where she’d “give him a kick. I always give him a kick for breaking my heart”) to a hilarious anecdote about a girlfriend of Phil’s who once wore a T-shirt emblazoned with the legend ‘Who the fuck is Frankie Miller?’ (To cut a long story short, a few years ago – at the funeral of a friend of Phil’s – Philomena saw a guy in a wheelchair and asked who it was. “So,” said Philomena, “it took me 30 years to find out who the fuck Frankie Miller was.”)

Stories From the Awards #3: Jimmy Page breaks his finger

It was 2007, and Jimmy Page was due to receive the Living Legend award. We had lucked out: we’d booked Jimmy before the Led Zeppelin reunion gig had been announced. Zep were the hottest story in town. Tickets were gold dust. The Awards were November 5, the gig on the 26th.

On the Sunday night before the awards, my phone rang. It was Ross Halfin. As well as being our awards photographer, Ross is close friends with Page.

When he has something important to tell you, Ross speaks in an intense whisper: “It’s off,” he hissed. “Jimmy’s broken his finger. You can’t tell anyone.”

“He can’t come to the awards,” he said, calmer now. “The reunion is going to be postponed. But they can’t announce it for a while. If he comes to the awards, everyone’ll know – they’ll all want to shake his hand. It’s off. He can’t come.”

We were flying Steven Tyler over from LA to present Jimmy with his award. 500 people were coming in three or four days time, to pay tribute to the Led Zeppelin genius. And he wasn’t coming? And I wasn’t allowed to tell anyone?

I didn’t sleep well that night. Luckily by Monday tea-time the story had broken. The Zep gig had been pushed back a month to allow Jimmy’s finger to heal and the awards were back on. Afterwards, Jimmy put us on the guest list for the O2 gig. That kinda made up for it.

We can confirm that the drummer for the house band for this year’s CR Awards in Tokyo is Korn’s Ray Luzier.

Ray has been the drummer for Korn since 2009, and before that played with Dave Lee Roth, Steel Panther, Stone Temple Pilots and Robert and Dean DeLeo’s short-lived supergroup, Army of Anyone. He’s a monster drummer, as anyone who’s ever watched videos like this or this will tell you.

Stories From The Awards #2: The Miracle of Arthur Brown

The first ever Showman Award went to a man who, in the words of the late Howard Marks, “inspired all the Alice Coopers and Marilyn Mansuns out there” – the God of Hellfire himself, Arthur Brown.

The only problem? Arthur turned up in a wheelchair.

It seemed like the night’s first big fuck up. How did we not know he was disabled? The Cafe De Paris is underground: steps run from the streets down to the balcony level and down again to where the meal was hosted. Then of course there were steps up to the stage. How were we going to get him downstairs? How was he going to get up on stage to receive his award?

Arthur was heaved down stairs by minders and helpers. And when the time came, up to the stage by friend/helper Mark St John, manager of the Pretty Things.

At which point, Arthur jumped out of his wheelchair, grabbed the mic and shouted “It’s a miracle!” before going into a rap: “Oh my gosh! Oh my gawd! He’s a celebrity, he’s won an award! Is he too old? Isn’t he dead? Didn’t he set fire to his head?”

It brought the house down. Once a showman, always a showman.

Stories From The Awards #1: Lemmy orders out for MacDonalds

The first year of the Classic Rock Roll of Honour was always going to be seat-of-our-pants stuff. We’d never done this before. Would people turn up? Would the food be OK? Would we look like twats in front of the industry?

We started small(ish): a fairly low-key affair in London’s Cafe De Paris hosted 200 people, including Deep Purple, Ian Hunter, Arthur Brown and more (looking at the guest list today, too many are no longer with us: Jon Lord, Chris Squire, Howard Marks, Lemmy). Jimmy Page turned up on the quiet to take a look at what we were trying to do.

Lemmy was the first ever Living Legend Award winner, his award presented by his old mate and nightclub owner Peter Stringfellow. That night there was a delay on the food. So what did Lemmy do? He sent his PR out to the nearest MacDonalds to come back with boxes of burgers and fries to wind us up, the old bugger.

The big bosses were not amused – but they got over it when Lemmy invited us all down to Stringfellows for an unofficial aftershow party that was officially the maddest one of the lot. The bar prices were a bit steep for music hack wages, but Stringfellow sent over some champagne so we necked that, made our excuses and left. (Well, you try chatting about Sepultura with a naked Brazilian pole dancer while she shakes her Brazilian in your face.)

(While this picture was being taken I asked Lemmy how he’d first met Jimmy. “I’m not telling you,” he said, nodding at Page. “He keeps things mysterious, so that’s what I’m gonna do – for once.”)

This year’s Classic Rock Awards pays special tribute to the work of Jeff Beck. Read our latest interview with the man himself here as he looks back over his career and talks frankly about 9⁄11, Jimmy Page, the time he almost ‘replaced Jimi Hendrix’ and more…

He reinvented rock guitar, now Jeff Beck's back with a new album, group and tour

And here’s a playlist of Beck’s best guest appearances…

The announcement that the Classic Rock Roll of Honour was heading to Japan happened at last year’s awards. And to seal the deal, X-Japan’s Yoshiki came over and played a unique tribute to Living Legend Award winner, Brian May…

Last year’s full awards show was a TeamRock+ exclusive and you can still watch it here.

Grab a drink and get comfy, the Classic Rock Awards are now online