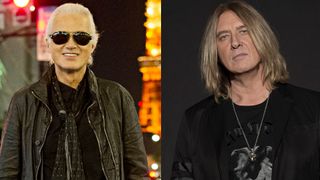 Led Zeppelin guitarist Jimmy Page and Def Leppard frontman Joe Elliott are the latest stars to be added to the lineup for the 2016 Classic Rock Roll Of Honour.

This year’s Classic Rock Roll Of Honour is being held in Japan for the first time, with the ceremony taking place on November 11 at Ryogoku Kokugikan Stadium in Tokyo – the spiritual home of sumo wrestling.

TeamRock Chief Executive Billy Anderson says: “TeamRock are delighted to have Jimmy Page and Joe Elliott joining us for what will be an incredible celebration of rock music. Rock musicians don’t come much more ‘classic’ than Jimmy Page and to have him and Jeff Beck – two masters of their trade – together at the Classic Rock Roll Of Honour in Tokyo will be a once-in-a-lifetime experience.

“And few bands have had the continued success that Def Leppard have enjoyed for so many years. Joe Elliott is an international rock icon and we are thrilled that he will be there with us in Japan.

“When you consider the other artists lined up to appear, we can guarantee that the Ryogoku Kokugikan Stadium is set for a night that will live long in the memory of anyone lucky enough to be there.”

Jeff Beck will be given the highest honours on the night and he has announced that he will be assembling his own special band of musicians for the event. Beck’s band includes an all­-star cast featuring the brothers Dean and Robert DeLeo of Stone Temple Pilots on guitar and bass.

He will also be joined by guitarist Tommy Henriksen, of US-based supergroup Hollywood Vampires, and Korn drummer Ray Luzier.

Tickets for the event are available now, via Ticketbis.

The Classic Rock Roll Of Honour 2015