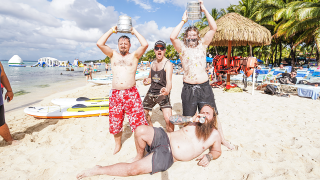 It's been just over a week since the annual 70,000 Tons Of Metal heavy metal cruise docked back at Fort Lauderdale Florida after four absolutely mind-blowing days (and nights) of high octane heavy metal (courtesy of Devin Townsend, Emperor, At The Gates, Possessed and many more) aboard the gigantic Independence of the Seas.

This behemoth of a festival has become a choice destination – a heavy metal mecca, if you will – for metalheads worldwide, with many sailors naming it as the sole festival they attend all year. And it's easy to see why they are willing to give summer blow-outs a miss.

Despite notoriously getting later and later with their band announcements, the lack of line-up never hinders the boat's ability to sell-out. Why is that? Here's your answer...

1. It's one happy heavy metal family

"Is this your first cruise? You are in it for life now," laughs one 70K devotee, and they are not wrong. Once you've experienced the boat life, there is no turning back. Or, to quote The Eagles, much like Hotel California, "you can never leave" – or at least you bloody well wish you never had to.

Many of the cabins contain four beds, meaning you can end up bunking with strangers. But they won't remain strangers for long, and by the end of these intensive few days you'll have made friends for life.

You might assume, what with sun shining, booze flowing and a steady rota of bands playing all day and night it would be carnage onboard – drunken metalheads passed out in the pools, vomiting overboard, heavy petting in the hot tubs... but you'd be mistaken.

Us metalheads are resistant folks and can hold our booze – particularly the hardy 70K crowd. Plus, everyone on board treats 70K as the event of the year, meaning there is a mutual respect that is extended to everyone aboard, keen to have the very best time they can and attract their new buddies back year after year. You wouldn't get such a well-behaved group of pop music punters, that's for sure!

That's not to say there isn't some occasional debauched fun though, there are lift parties, Vikings fine-dining, fancy dress Friday and a heap more harmless tomfoolery to be witnessed.

2. The line-up is insane and the bands play twice!

The first ever instalment of 70,000 Tons of Metal, way back in 2011 boasted the likes of Amon Amarth, Blind Guardian, Epica, Fear Factory, Marduk, Moonspell, Obituary, Sabaton, Saxon, Sodom and Voivod.

With every metallic subgenre covered, every single year, you're guaranteed to find several bands that'll suit even the most elitist of tastes. Festival organiser, Andy Piller, is adamant that there are no headliners – but with such a stellar line-up you can pick out at least four bands that would sit comfortably at the top of a more conventional festival bill.

If that's not enough, every single act plays TWICE on the boat. So if there is a clash, or you fall asleep after too many Fireballs, you can catch the one band later on – although each set is different, and some performances are downright legendary.

This year, At the Gates' second set was a Slaughter The Soul set, with the Swedish melodeathers playing their seminal album in full up on the pool deck and Exodus' second performance was just as significant as they played through their debut Bonded By Blood from start to finish. Finnish doomsters Swallow the Sun actually played THREE whole sets back in 2018 – the only band to push the boat out (so to speak) and tackle an extra set while onboard.

3. Watch bands in a hot tub

...Or sip cocktails in a pool while listening to death metal all the while having your sunscreen applied by a hot pool girl or guy (yes, scantily clad guys are also available for your sunscreen needs as of 2020!). THE DREAM.

The pool deck is hands down the biggest perk, as the "Biggest Open Air Stage to Sail the Seas" the ability to enjoy your favourite band in blazing sunshine, cocktail in hand is a dream come true.

What more could you want from a vacation than the opportunity to kick your feet up, don your best swimsuit and top up your tan? There's no awful soundtrack of Despacito here though – when you finally get back to solid ground you'll have forgotten that the whole world doesn't listen to metal, and quite frankly, it sucks.

This is a cruise after all, so it's only natural that the boat docks up somewhere?! Every year the boat has a new destination – meaning you can jump onboard in Florida, party with your favourite bands, jump off and arrive in an entirely different Caribbean country every. single. year.

This year the majestic Independence of the Seas stopped off in Cozumel, Mexico, giving us metalheads a chance to scope out the local landscape, pick up a bottle of tequila and even plan an excursion to the nearby ruins.

In previous years, the ship has docked at George Town in the Cayman Islands, Ocho Rios in Jamaica, labadee in Haiti and more, with the boat promising to return to Jamaica on next year's cruise.

What's more, if you are quick you can even plan a trip WITH A BAND. On this year's cruise, shore excursions with members of Cruachan, Trollfest, Grave Digger, Athiest and Origin were available, with the options of Mayan laser tag, exploring an eco-park, a beach break and water park trip or dune buggy snorkel.

There are numerous restaurants on board this gigantic 15 deck passenger ship, and when you are partying hard that's incredibly important. Up by the pool deck, the Windjammer Café offers up a huge buffet that is included in the price of your trip – handy for those late night munchies! – and plenty of the bands fuel up here too, meaning you might just be sat right next to your favourite guitarist while finishing your bacon and eggs.

Pizza is also on offer free of charge, and sandwiches at the coffee shop. Unlimited tea and filter coffee are also available – an absolute god send after a wild night.

You can pay for a fancy meal if you prefer, with options that include a seaside chippy, a 50s styled diner and a grade-A steakhouse.

But, by far the most impressive, and important, snack is the unlimited ice cream on the pool deck. The perfect way to cool down and a certified* hangover cure (*there is no scientific evidence to support this claim).

This is a biggie. Experience all the pros of a music fest, but without the camping. What a dream!

Running water, comfortable beds, a short walk between stages... it all sounds too good to be true! But that's the reality aboard 70,000 Tons!

At regular fests you have to leave your tent with your stuff for the day, or go back and fourth to refuel on booze and wind up missing half the bands.

At 70K you needn't miss a band, grab your drink and go or saunter back to your room to swap from bikini to biker boots to mosh in pits. There's no slumming it here. Plus, you will wake refreshed the next day after sleeping on a mattress!

If you do start to flag though, you can always grab a spot on a sofa in the bar or at the coffee shop – you wouldn't get that sort of luxury in a field. Or, if it all really does get too overwhelming, just head back to your room and you will have 100% peace and quiet.

Or, if it all really does get too overwhelming, just head back to your room and you will have 100% peace and quiet.

7. Rub shoulders with your heroes

You are stuck on a ship for four days, and so are the bands! Four days of eating, drinking, sleeping and breathing metal with like-minded folk is sure to bring you together, right?

There's none of this separation between the bands and the punters like in a regular fest, so you needn't be a VIP to rub shoulders with your idols – there are endless opportunities to down some dutch courage and introduce yourself to the musicians performing onboard.

In fact, the moment you leave your room you could bump into your favourite band! Jeff Becerra in the elevator? Devin Townsend at dinner? Suffocation in the hot tub? By the end of the four days your idols will have become your best friends.

Everyone is equal aboard the ship... Metalheads unite!

One unique aspect of 70,000 Tons is their All-Star Jam. With over 60 bands aboard and plenty of downtime, the cruise is one of the only festivals such an event is possible.

Some highlights from 2020 include a rendition of Black Sabbath's Paranoid by various members of Michael Schenker Fest, Leaves' Eyes and Flotsom & Jetsam; Metallica's Seek & Destroy with members of Einherjer, Cattle Decapitation, Omnium Gatherum and Flotsam & Jetsam's Eric Knutson on vocals and Motorhead's Ace Of Spades with Wintersun's Asim Searah on vocals.

As previously mentioned, the attendees really do make the cruise, and aside from instigating lift parties, Viking dining and fancy dress there are also more official fun times to be had.

The belly flop contest is always a winner – beer bellied men try and out-do each other, leaping into the pool and actively attempting to create the biggest ripple (and belly burn).

As the Independence of the Seas is a luxury cruise liner, it also has all the state of the art facilities you'd expect from a topnotch passenger vessel.

A gigantic gym means you can keep on top of your beach bod and classes are available for a small fee. A sports deck (next to the pool deck) offers a rock climbing wall, water slides, a basketball court and a FloRider for surfing. Plus, there's even an escape room – if you for some reason get bored of the all night bands, hot tubs, pool and loungers – AND a casino.

What's more, you are at sea (duh) and if you are really lucky you might even catch a glimpse of some dolphins while you're eating your breakfast.

Bands play all night long, which is especially great when your biggest beef with regular festivals is the fact that you run out of bands not long after you've recovered from the night before.

Those late night campfire parties might be off the table, but replace that with a late night soak in the hot tub, dancing to your favourite band and, when the bands finally call it a day at around 6am, taking the stage and singing yourself silly until dawn, the idea of piling around a shitty campfire in your thermals with a can of Fosters doesn't sound so appealing. Nothing like a bit of Tom Jones to wake up a weary metal crowd...