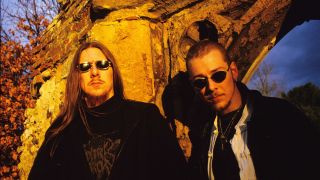 Emperor exploded onto the scene in the early 1990s and – though too young to legally enter a pub – quickly proved themselves to be one of Norway’s most significant black metal bands. Twenty years later and their songs sound just as vital and powerful as ever, not to mention unique – despite their enduring popularity, it’s interesting to note that far less bands have attempted to ape their style than other pioneers such as, say, Burzum and Darkthrone.

While the band’s career lasted only one decade – reunion shows excluded – their journey was immense. Their early recordings are some of the rawest (and purest) examples of primitive black metal recorded to tape, yet the recordings that followed just a year or two later would demonstrate a more grandiose, classically-inspired take on the genre that would prove groundbreaking. Never standing still, the group would soon absorb elements of death and even classic metal while becoming ever more technical and progressive, their final album a preview of Ihsahn’s solo career in all but name.

It’s also worth remembering that while the group ultimately attained an unusual level of acclaim and even something approaching respectability, when they first surfaced they really represented the dangerous and outlaw element that the still-underground and largely unknown black metal genre offered; indeed, they had three of their four members in prison at the time of their (semi) commercial breakthrough. Like Mayhem, the fact that the group are remembered today primarily for their musical achievements is testament to the quality of the songwriting and the irrepressible spirit of the music.

So without further ado, here are ten choice cuts that that will take you on an aural tour throughout the career of this ever-evolving outfit.

Emperor’s final album was predominantly the work of Ihsahn and as such carries a somewhat more progressive and less ‘evil’ sounding flavour overall. Nevertheless, it’s a strong album and The Prophet is a good example of the ambition of the material, the song beginning with a slow groove before throwing in a combination of serene melodies and brooding riffs into the mix.

Emperor had a habit of making the final song on each album one of the most epic and memorable, and third full-length IX Equilibrium was no different. Much of the album featured dense (and intense) blackened death metal and in that respect the closer is no different, yet it also makes effective use of more introspective strains as well as a mesmerising ebb and flow that rounds off the album effectively.

A mildly controversial choice admittedly, but this leftover from the Anthems session (now included as a bonus track on later releases of the album) is a wonderfully melancholy and bewitching piece and quite unlike anything else by the band. Guitars take a backseat to synths and Ihsahn’s hypnotic vocal work initially, with the crawling, minimal beginning building toward a satisfying crescendo.

Worth the price of admission for the first ten seconds alone, Witches Sabbath is not unlike Night Of The Graveless Souls in that it is a demo track updated with a bigger (but still unpolished) production, tighter performance and a preview of the greater use of synths that would define their later work. A slow, moody number, it is a welcome reminder of just how insane and possessed Ihsahn’s vocals really were back then.

Emperor’s demo Wrath Of The Tyrant epitomises the rawest, nastiest and most primal manifestation of 90s black metal and collection of crude but effective riffing and depraved vocal work really should be absorbed as a complete work. If we’re choosing individual songs we’ll opt for Forgotten Centuries because of its catchy guitars and the fact that it is exclusive to this release – unlike many of the songs which were later reworked and re-recorded. Which brings us to…

During their brief transition from primitive necrolords to symphonic black metal pioneers, Emperor recorded a self-titled EP that is still revered by old school black metal fans to this day. This track is gleefully manic and captures the furious aggression and mean, straightforward riffing of the original demo version while offering a slightly crisper, clearer sound, as well as some simple but irresistible keyboard lines. Not much depth here admittedly, but who cares when the music is as adrenaline-pumping as this?

Choosing songs from …Nightside is the definition of being spoilt for choice, and this is one of several songs there that perfectly capture the magic of the era, both in terms of the band and black metal as a whole. The synth work is massively stirring and atmospheric, sweeping up the listener and suggesting some greater drama - apt given what was going on at the time in Norway. The detailed percussion and the swirling bridge riff are the icing on the cake.

While we patiently waited for Emperor’s second full-length Anthems… to be released, we were teased with a single release of this song, which would prove to be the album’s centrepiece and one of its undoubted highlights. New drummer Trym makes his presence known with his high-paced double bass assault and the entire track has the same frantic, might-derail-at-any-moment vibe of the demos, while being tempered with some ethereal and almost whimsical symphonic passages.

Something of an anthem for the band, Inno A Satana actually has few points of comparison. Literally a prayer to Satan, its otherworldly choir voices and use of clean vocals (something we’d soon see more of from the band) give it a triumphant feel and it is both uplifting and somewhat sinister despite its unashamedly melodic touches, which rather makes sense given the subject matter.

I Am The Black Wizards demonstrates the massive leap forward Emperor made with regard to their songwriting post-demo. Longer riffs, a more ‘epic’ atmosphere, a greater use of dynamics and a more complex and unconventional approach to structure – it’s all here. We managed to ruffle some feathers by choosing the Emperor EP (more specifically its appearance as a split CD with Enslaved) over Nightside in our ‘90s black metal’ list, so here the choice is yours – the rougher original or the more polished album version. A victory either way of course…

Ihsahn: Emperor album would be a disappointment

Ihsahn on Arktis, breaking the mould and what he thinks of Emperor's legacy

Realm Of The Damned graphic novel to feature Behemoth, Emperor and Mayhem