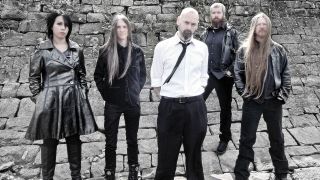 My Dying Bride’s history is to be celebrated in a brand new package which will be released later this year.

It’s titled A Harvest Of Dread and it’ll arrive on May 24 via Peaceville Records.

The limited edition volume will be presented as a 92-page book charting the Bradford outfit’s 29-year career, and will feature interviews with the band and those associated with them since their inception.

The foreword has been written by Triptykon, Celtic Frost and Hellhammer mainman Tom G Warrior.

Also included in the package will be five discs of rare My Dying Bride material, including the Towards The Sinister demo, plus tracks from their early EPs and 7-inch singles, along with a live concert recorded in the Netherlands in 1997.

Vocalist Aaron Stainthorpe says: “I am astounded at the body of work this outfit has created over quarter of a century but immensely proud too.

From humble beginnings of demo tape, draughty rehearsal rooms and transit vans up to the heady heights of digi-packs, hotels and tour buses, we’ve done just about everything a rock’n’roll band is supposed to do.

“Members have come and gone, some lost forever and others staying in touch and all, thankfully, still friendly and welcoming. I look back at our extensive career, much of it laid out here for all to see in this impressive collection and feel strong and thrilled at what our output has achieved.

“There surely is something for everyone scripted here within A Harvest Of Dread as it’s been hand-picked by the band and a select number of friends who know better. And if this isn’t enough, we are working on new material already so that, perhaps in another 25 years, we may be sat here again doing something very similar."

To mark the announcement, a video trailer has been released which can be watched below.

A Harvest Of Dread is now available to pre-order direct from Peaceville.

My Dying Bride: A Harvest Of Dread

CD 4: Pre-productions and rarities
1. All Swept Away
2. Like Gods Of The Sun
3. The Whore, The Cook, The Mother
4. An Unforgettable Journey
5. I Believe
6. On Monolith
7. Glorious Midnight
8. The Fool
9. The Child Of Eternity
10. Scarborough Fair
11. Failure
12. Hollow Cathedra