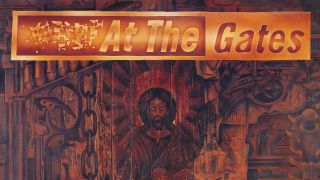 It’s May 8, 2008. At The Gates are taking the stage in Osaka, Japan. It’s their first time playing the country – and their first show since splitting 12 years earlier. They open with the title track from their fourth album, Slaughter Of The Soul, which begins with a churning, disjointed riff that stops, suddenly, before frontman Tomas ‘Tompa’ Lindberg bellows a ferocious, “Go!”

In Osaka, where audience interaction is far from guaranteed, the entire crowd shouts it with him. That, bassist Jonas Björler thought at the time, had never happened before.

“When we reunited in 2008, those shows were amazing,” he says. “That was genuinely the greatest response we’d ever had. We got goosebumps. It was overwhelming to see how much people loved the songs we’d written all those years ago. But it all happened by word of mouth when we were busy doing other things. You can’t complain about making a record that people say is a classic. But the hype didn’t start until two years after we’d split up!”

Slaughter Of The Soul is now firmly established as one of the most influential metal albums released during the 90s. The so-called ‘Gothenburg sound’ has become such a ubiquitous part of modern metal’s sonic vocabulary that few would dispute At The Gates’ status as pioneers.

Back in the early 90s, however, the Swedes were simply one of many aspiring underground death metal bands exhibiting a cheerful disinterest in mass appeal. When the band recorded their debut EP, Gardens Of Grief, they had only been playing their instruments for a year or so, and while grimy early albums such as 1993’s With Fear I Kiss The Burning Darkness will always have their advocates, they offered scant evidence that the band were about to morph into an epoch-shattering, cutting- edge machine.

That all changed after the departure of original guitarist Alf Svensson in ’93, and the passing of the songwriting mantle to the band’s other six-stringer, Anders Björler, Jonas’s twin brother, for third album Terminal Spirit Disease.

“Alf used to bring in all the really weird, twisted stuff,” the bassist recalls. “But then Anders took over the songwriting, or at least 90% of it. We could hear some new influences straight away. On Terminal Spirit Disease there were some easier song structures, and we felt at that point that we knew the path we were going to head down. The old stuff was cool, but we really wanted to make our sound more accessible. We wanted to write death metal hits, ha ha ha!”

Recorded early in 1995 at Studio Fredman in Gothenburg, and overseen by noted producer Fredrik Nordström, Slaughter Of The Soul was At The Gates’ first album for new labelmasters Earache Records, home to many of the Swedes’ own favourite bands, including Morbid Angel and Carcass. Signing to Earache was undoubtedly a commercial step up for Jonas and his bandmates, but they felt no pressure to make a particular type of metal album.

“Those songs, those riffs, those performances, it was all just a big coincidence,” Jonas grins. “I am pretty certain we didn’t have a plan. I guess we had all progressed as musicians, but we were still pretty inexperienced in the studio. The truth is that we were writing easier songs, and it’s much easier to make it sound tight when the songs are simpler!”

The one member of ATG that didn’t have the easiest time during the recording process was drummer Adrian Erlandsson.

“When Adrian put down the drums for [album opener] Blinded By Fear, he had a serious nosebleed. He had been working for 12 hours in the forest, cutting down trees and stuff. So it was a hard recording for him. He was the only one with an outside job! But when you’re a Swedish metal drummer, you have to cut down trees to make your own drumsticks, ha ha ha!”

Given its reputation today, you would be forgiven for assuming that Slaughter Of The Soul was an instant success upon its release in November 1995. However, despite glowing reviews in the metal press and the enhanced profile partially provided by the move to Earache, the metal world of the mid-90s was not quite ready to proclaim the album an era-defining masterpiece. Worse, the band were about to fall apart before they’d even achieved lift-off.

“The reaction was not instant at all,” Jonas sighs. “We had some good press, of course, and a lot of journalists loved the album from day one, but we couldn’t get the fans on board straight away. We didn’t do any headline tours. Eventually, we started to get offers for headlining stuff, but then Anders quit the band. We’d been on the road for five months straight and he was just worn out. It wasn’t a great situation and we were all upset about it, but that was that.”

As a result of their untimely split, At The Gates were conspicuous by their absence as Slaughter Of The Soul began to steadily exert its allure on the burgeoning 21st century metal scene, particularly in the US where bands such as Killswitch Engage, Trivium and The Black Dahlia Murder made no bones about their love of the album and their debt to its game-changing sound.

“Trivium would absolutely not exist without Slaughter Of The Soul,” says singer Matt Heafy. “It was a groundbreaking record and it was a direct influence on the music Trivium has made over the years, and still to this day, and it’s been an indirect influence on so many of our other favourite bands, too.”

This new generation of metal kids got their chance to see what all the fuss about when At The Gates reformed in 2008. Initially, it was supposed to be just for one summer tour.

“Over the years we started to have a lot of communication with fans that had never seen us play the first time round because they were only eight or nine years old back in ’96,” Jonas notes. “It grew via word of mouth, and eventually it was obvious that a lot of people were interested in seeing us play. When we did the reunion thing in 2008, it was just a simple plan for that summer and nothing else, but it was so much fun that we thought we might as well continue. Give the people what they want, right?”

More than decade on from returning to action, Jonas and his bandmates have more than made up for lost time. Since reuniting, they’ve made two albums, 2014’s At War With Reality and 2018’s To Drink From The Night Itself, the melo-death masters are proud but ever-so-slightly bemused about their impact on the metal world.

“Somehow that album made a deep impression on people, on some psychological level,” Jonas concludes. “You sit in your bedroom and write riffs and what comes out comes out, you know? But it’s a great record and if people still have strong feelings about it, we’ll take that!”

It’s left to Matt Heafy, ever the student of heavy music’s nuts and bolts, to explain how and why At The Gates broke the mould on Slaughter Of The Soul.

“That album can be vicious, intense and brutal, but it delivers that intensity while shrouded in catchy, dark melodies. The beautiful thing that those Swedish metal bands brought to the global scene is turning the melodies that other bands would be playing as lead guitar lines, like Iron Maiden do, into rhythm guitar lines. At The Gates is a band whose riffs you can hum! That’s why I think Slaughter Of The Soul is an essential part of any serious metal musician’s vocabulary.”