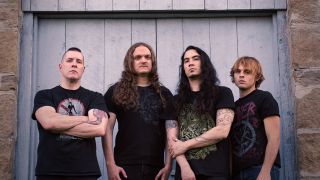 Throughout the legendary Canadian thrashers Annihilator's  30+ year tenure, guitarist and vocalist Jeff Waters has remained the one constant, leading the charge into heavier, groovier territories. So who better than Jeff to pick the 10 best Annihilator songs? He’s been there for all of them!

We asked the man himself to choose his favourites, and this is what he said…

Set The World On Fire

“It’s our second most popular song live! I like the simplicity of this one; those usually go over the best live, while the more technical songs can occasionally lose people. It’s very robotic in the main riffing. I got the idea from one of the last levels on Super Mario 3 ha ha! There is a MIDI riff in one of the final levels that I heard over and over, while trying to get to the end of the game. I think it embedded itself in my brain, so when it was time to write for that next record, that was the first thing out of my head and into my fingers!”

King Of The Kill

“This song is our most popular live song and that’s why I like to play it. It’s straight-forward, basic yet powerful and catchy! Simplicity sometimes is best. I wrote the lyrics with my old pal John Bates, I said ‘Let’s write a song about a lion,’ then realised halfway through the song that the female is the most ferocious of the sexes – but Queen Of The Kill didn’t have the right ring to it ha ha!”

Welcome To Your Death

“A very original song, I think. Also, I’d say it’s our third best live song! It’s straight-forward with many riffs, but with weird parts in the middle. This song shouldn’t make any sense in its parts being strewn together, but it worked!”

“This was the song that brought us to the metal fans worldwide en masse. As ‘thrash’ as they billed us, this was not a thrash metal song – it was a hard rock song. The only trace of heaviness is the guitar riffing in the chorus, which has a slightly Gary Holt/Exodus feel to it. The solo reminded me, years later, of some Michael Schenker, which was a bit ironic because I was influenced by Matthias Jabs from the Scorpions – I never owned a Schenker record! It’s a very melodic song with many different parts. Cradle Of Filth recently did a cover of this song and it’s one of my favourite covers I’ve ever heard of any song!”

“There’s something about the groove of this one – it’s thrash but with a groove! I like the breakdown in the middle, and then it goes into a typical ‘80s heavy metal riff and solo. I also love the lyrics and what the song was about. I wrote it about USA murderer Jodi Arias and was obsessed with watching that trial.”

“This is a new song. I love the groove and kinda Van Halen-style solo. It’s definitely not a thrash song, but groove is great. The lyrics were partially for anyone that has any kind of ‘out of the norm’ trait, be it mental illness, weirdness, differentness… anything that society tells us is not normal! It’s also written to a psychologist I saw years ago, when I was seeking help for my issues and being a parent. After taking a few months of my money, the doc made a snotty remark about my black, rock ‘n’ roll t-shirts and my choice of career playing metal music. This song is a big FU to her, as well as telling everyone that your ‘differentness’ is what makes you special and unique and important.”

Sounds Good To Me

“A positive message to anyone feeling despair. Everything will be alright! I love the chords and soloing in this song – there’s a bit of Eagles/Joe Walsh in there and certainly no-one would guess that this song is from a metal band!”

“One of my few punk-influenced songs but this one and Kraf Dinner are my faves from that genre. It’s about life in the big city, being disillusioned about city living. I ended up moving far out of a city here in Canada, to get some peace and quiet! I guess this song in 1996 was my beginnings of wanting to get out of the noise and craziness of city life. I get enough of that touring the world!”

“As humble as I am, hopefully, this song has probably my best combination of ‘guitar solo with best rhythm behind it’! This is in my top just for the solo section.”

“Off the very underrated record Schizo Deluxe in 2005, this song has my favourite chorus by Annihilator ever. A nod to Slayer in the bridge, some creepy vocals and what I would say is my best guitar tone of all-time make this song and CD one of my faves.”