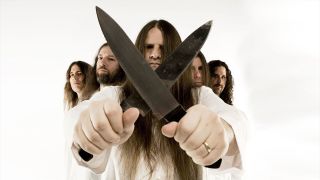 With a band name, sound, logo, aesthetic and songs about zombies, serial killers and the most depraved manifestations of the imagination, Cannibal Corpse are understandably one of death metal’s most venerable and iconic acts. Not only the genre’s most successful band but also the most highly-consistent, rarely dipping in form over neary 30 years century, it’s made the job of ranking their albums as grim as their lyrics.

Sadly one album has to come last, but Gallery Of Suicide is still worth any death metal fan’s time. Displaying some of the band’s most instantaneous songs in the form of the chugging Sentenced To Burn and I Will Kill You, while the ever-evolving menace of the title track shows the band at their most adventurous.

Getting extra points for the absurdly disgusting album cover alone, the band’s final album with founding guitarist Jack Owen has some of the band’s most fiendishly inventive and catchy moments. Try not to snigger with minacious glee as you windmill headbang to Psychotic Precision, Frantic Disembowelment and They Deserve To Die.

The band's 13th album saw Cannibal continue their post-Kill renaissance with infernal glee. The grotesque adrenaline rush of High Velocity Impact Splatterkicks off an album of septic bangers that put most of death metal’s new guard firmly in their place.

A fitting moniker for the metal’s goriest sons and a highlight of their mid-career output. Both musically and lyrically there’s a real sense of playful enthusiasm throughout Gore Obsessed, with Hatchet To The Head, Dormant Bodies Bursting and Pit Of Zombies managing to be ridiculously infectious despite their repugnant nature.

As is the case with one of metal's most consistent forces, trying to pick highlights from the Buffalo berserkers' most recent album is a case of splitting hairs with a rusty hatchet. The monolithic Code Of The Slashers and title track have proved to be hellish live staples, while the baleful Shedding My Human Skin and Corpse-by-numbers Firestorm Vengeance and Heads Shovelled Off are delightfully abhorrent.

A nasty, downright horrible sounding album even by Cannibal’s standards. The sickening riffs seem to seep out of the speakers while the frenzied clattering of drums and brutish vocals of The Spine Splitter still evoke a troop of baboons ripping a body to pieces.

Taking their cues from the early Floridian innovators and their love of the most depraved, loathsome horror movies and books known to man, Cannibal Corpse’s debut spewed out of Buffalo, New York just a year after they made their live debut. Though more overly influenced by the burgeoning thrash metal scene, it still sends a jolt of depraved excitement through the cerebrum.

With career-best playing from founding rhythm section Paul Mazurkiewicz and Alex Webster driving forward the visceral Scalding Hail and Carnivorous Swarm, Evisceration Plague captialised on the momentum from defining predecessor Kill. The demented, lumbering stomp of the title track is one of the band’s all time classics.

Noticeably uglier than their debut, Butchered At Birth saw the Buffalo quintet cement their place as death metal’s premier fiends. The grotesque artwork caused outrage across the globe, but it’s Chris Barnes’s deeper guttural grunts and the chilling production that made the likes of Covered With Sores such abhorrent highlights and set the blueprint for what followed.

How many other bands sound as thrilling as this 12 albums in? Whether they’re blasting through the perverse Demented Aggression or lurching ominously towards their prey on Scourge Of Iron and As Deep As The Knife Will Go, Torture proves to doubters that there’s no need to reinvent the wheel when it’s as brutally efficient as this.

Before parting to form Six Feet Under and taking the original band logo with him, Chris Barnes helped helm some of the most horrifyingly violent and undeniably catchy anthems in the band’s arsenal. Who else could be so acclaimed for creating a song as contemptible as Stripped, Raped And Strangled?

The first album to feature World Of Warcraft-obsessed, mountain-necked vocalist George ‘Corpsegrinder’ Fisher. His ugly yet more decipherable death growls added a new impetus to the rapid-fire vulgarity of Devoured By Vermin and Mummified In Barbed Wire and saw the band carry on refreshed and with the same carnivorous zeal.

With the old guard making a comeback and a new crop of bands taking death metal to exciting new plateaus, it was up to Cannibal Corpse to reassert their dominance. Not only was Kill one of the best extreme metal albums of 2006 but its still stands as the finest collection of songs in their catalogue. Given a supreme production job by Hate Eternal’s Erik Rutan, the likes of blistering opener The Time To Kill Is Now and monstrous Death Walking Terror gave the scene an almighty kick up the arse and ensured Cannibal’s position at the head of the table from where they’ve ravenously continued to feast since.

Cannibal Corpse drummer: my kid doesn't like my band