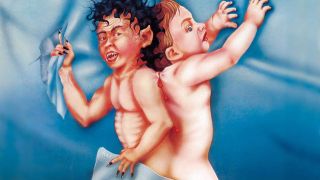 Years ago David Beckham caused major consternation among thrash metal fans when he was ‘papped’ wearing a Bonded By Blood t-shirt. Surely, we all mused, the football-cum-fashion icon wasn’t actually a fan of 1980s Bay Area metal? Would he suddenly start talking excitedly about his admiration for the twin guitar work of Gary Holt and Rick Hunolt? Did he have a view on whether Paul Baloff was a better frontman than his successor, Steve ‘Zetro’ Souza?

The fantasy was amusing for a flicker of time, before it dawned on everyone that Beckham had never actually heard of Exodus [let alone heard the Bonded By Blood album], and that he was merely indulging in the passing fad of wearing 80s metal shirts, one that gripped celeb wannabes for a time measurable as equivalent to the IQ of the average reality TV star.

“Yeah, I saw that a couple of years ago. He plays sports, right. Married to Posh Spice?” laughs Exodus guitarist Gary Holt. “You know, it would have looked better if Posh had been wearing it, with nothing else on, giving me the ‘come to bed’ eyes! What do I think of it? There was that stage when celebrities thought it was cool to wear classic metal t-shirts. They paid well over the odds because they were told it was fashionable. So, you know, whatever…”

Based in San Francisco, Exodus were started in 1980 by guitarist Kirk Hammett, in a line-up also featuring second guitarist Tim Agnello, bassist Carlton Nelson and drummer/vocalist Tom Hunting. Within a year, Holt was on board, replacing Agnello. And, with Geoff Andrews coming in on bass, plus the recruitment of singer Paul Baloff, Exodus recorded a three-track demo in 1982, featuring Whipping Queen, Death And Domination and Warlords. What had begun as nothing more than an imitation of the New Wave Of British Heavy Metal was now sprouting hairy palms and horns. A fresh beast was born.

“I wouldn’t ever say that we invented metal, or even thrash metal,” believes Holt. “But we certainly played our part. And I would claim that Bonded By Blood is the classic thrash album.”

But on April 11, 83, Exodus were twisted inside out when Hammett surprisingly quit to replace Dave Mustaine in Metallica. However, barely pausing for breath, Hunolt was brought in, while Rob McKillop displaced Andrews. At last, Exodus were ready to breathe fire, ire and not a little brimstone.

“I’d say that things really got going when Kirk left for Metallica. Within a week I’d written two songs that ended up on Bonded…: Strike Of The Beast and No Love. For me, that was the start of the whole album process.”

In March 1984, the band recorded what was to become a legendary demo, called The Turk Street Tapes. With producer Doug Piercey, the quintet ran through five tracks that would eventually form the backbone of their debut record, namely Exodus, A Lesson In Violence, Strike Of The Beast, Bonded By Blood plus And Then There Were None. According to myth, Exodus ran out of cash, which is the reason that the demo was never finished. Not so, says Holt.

“Nah, what happened was that we got a deal – with New York label Torrid – and so there was really no need for us to finish off the songs with Doug. It’s as simple as that. I love the story about us being strapped for money, though. It would have been typical of us at the time! But those tapes were cool. They still sound very good, and one day I’d like to put out an expanded edition of Bonded By Blood, and include those versions as well. People might be surprised by them!”

In July 1984, the band were at Prairie Sun Studios in San Francisco, recording that first album. Only it wasn’t with Piercey, but Mark Whitaker.

“Doug was too crazy for us, man! Seriously, he’s insane. The guy’s still a good friend of mine, but he just liked to party too hard. We were bad enough at that shit without having a producer outdoing us. We needed someone far more down to earth, so we went for Mark.”

Whitaker had been the band’s manager in the early days, and was also the tour manager with Metallica when they put in the infamous call to Hammett. “Mark could put the fear into us,” recalls Holt, clearly relishing the memory. “One look or word from him could pull us right back in line. He made sure that we got the work done. We didn’t mess with him, and that’s what we needed. Hey, all of us were kids still, and you know what it can get like when you let kids loose, right? Mark kept us disciplined.”

That’s probably only true up to a point. While Whitaker cracked the proverbial whip in the studio, the band still found time to cause mayhem and plenty of havoc.

“A couple of years ago, we went back to Prairie Sun to record the drum tracks for the Tempo Of The Damned album,” continues Holt. “The guy who owns the studio is the same man who was in charge back in 1984 – and he’s never forgotten us. He talked for ages about the damage we caused in the cabins where all the bands live while they’re at the studio. Apparently, we hold the record for the most destruction wreaked by anyone. I’m proud of that one!

“What did we do? Nothing that’s gonna shock anyone. You get a bunch of kids together with loads of alcohol and shit, and what do you think will happen? We had a party every night, invited up our friends from the Bay Area, and there’d be some drunken brawls… It’s great to know we made such an impact.”

In between making large dents in cabins and even larger ones in drink cabinets, Exodus finished off the album in just two weeks. That’s right, 14 days. No messing, no haggling. Just plug in and blast.

“You gotta remember that budgets back then were very tiny. So there wasn’t the money to spend ages doing mixes and overdubs. We did the whole thing pretty much live, save for some of the guitars and vocals. We never even knew there was another way to record! It worked for us, and gave the record that live feel which I believe has helped the thing to stand the test of time.”

But, while the album itself was in the bag by the start of August 1984, it was to be several months – actually, almost a year – before Bonded By Blood finally came out. Over the years, there have been so many stories circulating about the reasons behind this lengthy delay, and how badly it affected the band. But now, with a clear-sighted, objective perspective, Holt is fairly laid back about the whole thing.

“There were a few reasons. One was that Torrid were a brand new label, and it took them time to get their shit in order. Another was that there were so many bad tape copies of the album out, that we thought it was likely to diminish the impact of the thing. People seem to think that the whole idea of albums getting leaked too early only started to happen when the internet came on the scene. But even 20 years ago it could hit bands badly. I didn’t have a serious problem then, but we all felt that the original album title should go, to offset this problem.”

Exodus had planned to call the record A Lesson In Violence, but then make a quick switch to Bonded By Blood, something further encouraged by the cover artwork debacle.

“We got an old hippy called Tad Hunter to do the design for A Lesson In Violence – man, it was crap! All purples and crazy colours. We learned from that never to work with hippies. I fucking hate them. The one good thing Tad did was to design our logo.

“Anyway, all that did was to persuade us that we really were right to change the title. And I came up with the new idea for the cover [two slightly disturbed Siamese babies, erm, bonded by blood]. It could have been more demonic, but hey, David Beckham liked it! And it’s become a classic in its own right.”

But did the lengthy gap before the album’s release damage the band? The theory goes that, had it hit in 1984, then Exodus could have seriously challenged Metallica’s pre-eminence with Ride The Lightning the same year, and even stolen a march on Megadeth [whose debut album, Killing Is My Business… And Business Is Good, didn’t come out until 1985]. Holt, though, doesn’t believe in dwelling on the past.

“We can’t change what happened, so why should I get upset about it now? Sure, back then it was frustrating, because all we wanted to do was get the album out, and go on the road. But none of us ever thought in terms of becoming hugely successful, and we never felt that it cost us anything.

“We’re still around, touring and making albums in the 21st century, so we must be doing something right. Who can tell what would have happened had Bonded… come out a few months earlier. I can’t say that I wouldn’t like the sort of money that Metallica have made. But there’s never any guarantee.”

For Holt, the real success of Bonded By Blood lies not in imagined sales, but in its influence.

“I listen to it now, and know it’s the finest record of our career. Not only that, I genuinely think it’s the best album to come of the whole thrash era, and I am including Reign In Blood by Slayer in that. It is a landmark, and one I’m proud we got to make. Everything about it is right, not just for that time, but for all time.

“I find if very heartening when I meet young bands today who go on about how much that record inspired them. We did make a difference to so much that happened after us. Like I said before, I would never lay claim to having invented thrash, but that one record helped to lay the foundations. And, as death metal was the satanic spawn of thrash, and itself gave birth to black metal, well… you could say that without Bonded By Blood things may have been different.

“If my career as a musician is measured in terms of that one record alone then I won’t complain. Not everyone gets to make a classic.”

Who knows, perhaps a re-issue of the album [with those aforementioned Turk Street tracks] will generate such a boost in sales that Holt can afford to go back to Prairie Sun and pay for all that damage.

“Hell, you’re talking shitloads,” he says, grinning like a maniac.