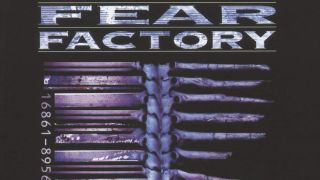 It’s easy to forget that the future is created in the here and now.

When Fear Factory released second album Demanufacture in 1995, it pointedly and powerfully predicted both metal’s future and the runaway train of interactive technology and artificial intelligence. More importantly, it changed the way heavy music sounded forever.

In truth, Fear Factory were not the most likely candidates for widespread success. Their 1991 debut, Soul Of A New Machine, was an extraordinarily fresh and inventive extreme metal record that took its cues from death metal, grindcore and industrial music, with vocalist Burton C. Bell’s then-unprecedented method of switching from guttural growl to haunting croon proving the element that contributed most to the band’s perceived uniqueness. But it wasn’t until 1993’s similarly groundbreaking Fear Is The Mindkiller remix EP that Burton and guitarist Dino Cazares’s musical vision would be truly brought to life. Comprising new versions of songs from their debut, dismantled and rebuilt by Rhys Fulber of industrial heavyweights Frontline Assembly, the record’s joyous cross-pollination set Fear Factory on the right track and towards the album that would soon define their career.

“Fear Is The Mindkiller is what we wanted to be,” Dino says today. “We just didn’t have the technology to do that at first. We didn’t have the keyboard samples or the old-school computers that guys like Rhys were using. So we’d try to emulate the machine with guitars, bass, drums and vocals. If you listen to old industrial bands like KMFDM or Ministry, they’d sample a metal riff and then loop it so it was the same riff over and over. Well, we were trying to copy that.”

“Dino was trying to find a way to turbocharge their music and soup it up a little bit,” explains Rhys. “Fear Is The Mindkiller got the band into industrial clubs where they wouldn’t have been played before. When it came to the next record, they asked me to bring more of that stuff into their music.”

Instrumental in signing Fear Factory to Roadrunner all those years ago, renowned metal A&R Monte Conner (now of Nuclear Blast) plainly saw the potential in the band’s idiosyncratic approach, and he maintains that what they were doing was revolutionary.

“Fear Factory were pioneering from the beginning,” he insists. “Those vocals started on that first album – a brutal death metal band were putting in these poppy choruses, and how groundbreaking was that? But the goal when they were making Demanufacture was to evolve away from death metal and towards something completely new.”

Thanks to the diverse tastes of all involved, Fear Factory were never destined to be another generic metal band. From death metal and industrial to electronica and soundtracks, everything the band loved was coalescing into a new and thrillingly unfamiliar identity. The early 90s were not the most auspicious time for metal in commercial terms, but alongside the likes of Sepultura, Pantera, Machine Head and Korn, Fear Factory were throwing the genre a lifeline by simply devising a new way of doing things.

“We had this vision of how we wanted Fear Factory to sound and it took us a while to grasp and understand our craft, and how to get to that point,” states Burton. “At the time of Demanufacture, everything came together. Lyrically, conceptually and sonically, the arrangements, the production… it all just clicked.”

“We weren’t afraid of taking chances,” Dino adds, “but we were really just doing what we liked. Making bigger choruses or bringing in the techno elements, it was like, ‘This is the shit we like, so let’s do it!’ We had nothing to lose.”

As Fear Factory’s music evolved, so did the band’s conceptual core. Although history may tend to paint the band as sci-fi nerds, perpetually banging on about man’s impending battle with robots, the true inspiration behind *Demanufacture *and its tales of rebellion against a corrupt technologically advanced elite came from the reality of life on the streets of Los Angeles in the first half of the 90s.

“From 1990 to 1995, there were fires, floods and riots,” Dino explains. “In 1994 there was a big earthquake. So we saw LA being destroyed. We saw all the looters, we saw people shooting each other, we saw the National Guard patrolling our streets at night. So we were living it. Burt was able to channel all of that and put it into Demanufacture. The first line you hear on the album is ‘Desensitised by the values of life…’ That was what we saw.”

“Demanufacture was a concept album, but it was inspired by true events,” adds Burton. “We were in a hostile environment. The whole time leading up to the riots, you could sense tension in the air, between everybody. Everyone was a target. No one trusted the police. It was surreal. There were guys on top of buildings with semi-automatic rifles, protecting their goods. We were living in Demanufacture times, fighting against the man and struggling for survival.”

With high expectations, an incendiary concept and a handsome budget from an optimistic Roadrunner, Fear Factory began work on Demanufacture at the legendary Chicago Trax studio, chosen primarily because industrial mainstays like Ministry and Skinny Puppy had recorded there.

“That studio was a fucking wreck,” Dino recalls with a sigh. “We started recording drums, the computer kept crashing, people were selling drugs out of the studio. We were like, ‘We need to get the fuck out of here!’”

Keen to avoid any further delays, the band swiftly abandoned Chicago for Bearsville Studios in upstate New York. Esteemed British metal producer Colin Richardson was on board once again, having worked with the band on their debut, and Bearsville itself had a formidable reputation as a studio where legends like Alice Cooper and The Rolling Stones had committed classics to tape.

“Bearsville is out in the fields in the middle of nowhere!” Dino chuckles. “We were city boys in the fucking mountains. While we were there, Faith No More were in one room, Bon Jovi were in the other, and we were in the middle. Let’s just say we hung out with Faith No More a lot, ha ha! We started doing drums and everything was going great, but when we started on guitars we hit a brick wall. Colin didn’t like my guitar tone. We fought about it for two weeks and didn’t record one fucking note!”

In conflict with their producer, Dino and Burton could feel time slipping away and their budget rapidly evaporating. Colin remained adamant that Dino should change his equipment. Dino told Colin to fuck off.

“I was like, ‘Fuck you, this is my sound!’ you know? One day I was so frustrated, I walked down to a fruit stand at the bottom of the hill from the studio,” says the guitarist. “There was a guy working there and he looked familiar, and it was the guitarist from [DC hardcore legends] Bad Brains, Dr Know! So I started talking with him and told him what was going on, and he said, ‘I’ve got some stuff you could use!’ So we plugged my amplifier into his cabinet and suddenly, boom, the tone was there! Everyone was wiping the sweat off their foreheads, you know? Ha ha!”

With the deadlock broken, the making of Demanufacture began in earnest. With a greater emphasis on keyboards, samples and sound effects, but still driven forward by that synchronised and mechanistic blend of riffs and kick drums, the album’s 11 songs promised to be a radical new manifesto for metal. But such was the focus and ferocity of Dino Cazares’s vision for the album that he was rapidly coming to the conclusion that Colin Richardson was no longer the right man to mix it.

“Producers hear things differently sometimes,” says Rhys Fulber. “But Dino was vehemently opposed to doing it Colin’s way. It’s a little bit sad that it was allowed to roll and a whole bunch of money was spent, but Colin did contribute great stuff to that record.”

“Nothing against Colin, he’s brilliant, but I felt that we’d moved in a different direction,” explains Dino. “If he’d mixed it, it would’ve sounded like a typical metal record, and we needed to be outside the box. The first mix was horrible; the keyboards weren’t in the forefront, and we wanted them loud, so we took back control of the record. We started mixing the album with Rhys and [Frontline Assembly engineer/producer] Greg Reely and the first song that Greg mixed, we were like, ‘Oh my god, this is it!’”

“We were at Enterprise Studio in Burbank, in this big room where they’d edit music and sound for films,” Burton recalls. “In front of this big, beautiful mixing desk there was this 20-foot movie screen, so we would play Bladerunner, Terminator, Apocalypse Now and Robocop, or Raymond [Herrera, ex-Fear Factory drummer] would be playing Mortal Kombat or Street Fighter on this huge screen, and that’s how we’d get our inspiration. It was an exciting, fun time.”

Demanufacture was released on June 13, 1995, replete with fittingly groundbreaking artwork courtesy of noted graphic artist Dave McKean, and soon accrued some of that year’s most ecstatic reviews. It went on to become a huge success and its influence on successive generations of metal bands is unquestionable. Fear Factory’s next album, Obsolete, would be even more successful and earn the band their only gold record in the US. However, it is for Demanufacture that Burton and Dino will inevitably be best remembered when they eventually hang up their boots. This December, they will hit the UK for a run of headlining dates, performing Demanufacture in its immaculate entirety. Fear Factory are one of the few bands that have the perfect excuse for revisiting the past: above all else, Demanufacture was ahead of its time and almost eerily prescient on multiple levels. Two decades on, it still sounds like the future.

“It really is a masterpiece and Fear Factory don’t get the credit they deserve for being innovators,” says Monte Conner. “Their sound and their concept is only getting more relevant as time goes by.”

“Demanufacture put us on the map,” Burton concludes. “We were ahead of our time. What we did was raw and real and instinctive. That raw energy just wasn’t for the mainstream and I’m fine with that. I never wanted to be a mainstream artist. I wanted to be on the fringe and dangerous, and Demanufacture is still dangerous.”