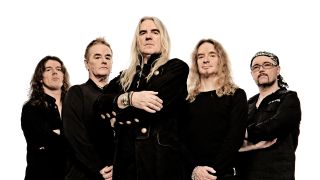 One of the very first bands of the New Wave of British Heavy Metal to sign a record deal, the mighty Saxon have influenced bands ranging from Mötley Crüe, Metallica and Pantera to Celtic Frost and Bathory. Singer Biff Byford says "we were a band at the crossroads really, between the 70s and 80s."

It was 1979 when they released their landmark debut, the self-titled album Saxon, and the subsequent start of the NWOBHM movement. Although it wasn't a major hit – Biff recalls "we sold I think it was about 12000 albums, which would be a lot now, but it wasn't a lot then" – it paved the way for their second album, Wheels Of Steel.

"The record company said, 'Well you have one album left so go off and write us a great album.' I think [Wheels Of Steel] was inspired by the need to make a better album, if you know what I mean?" Biff explains. "So we just got more radical with our song writing and tried to write a new style of faster, harder, more working class orientated music. That’s what we did."

This second offering would put Saxon on the map and was the defining album for the band in the 80s, and arguably even to this day, alongside Denim and Leather and Strong Arm of the Law to make up their "triptych of classic albums".

In honour of the 40th anniversary of the release of Saxon and the year widely credited as when the New Wave of British Heavy Metal began, we sat down with Biff Byford to discover what songs out of their extensive back catalogue the formidable frontman favours.

“It’s the first time really a band had written about something more 'street cred' it wasn’t really a glamorous title, you know “Motorcycle Man”. Everyone sort of loved it and it seemed as though everybody was into motorcycles so it sort of struck a cord with the audience. Lyrically, it’s not my greatest lyrics but I just think the attitude of that song is great."

2. Strong Arm of the Law

"We got stopped by the police on Tower bridge actually, and they said they found drugs but they didn’t – so I wrote a song about it, being busted by the police and then they let us go a few minutes later.

"It was just a ploy they used to use then to try and frighten you into telling them where the real stash was. So it’s just a song about that really, it’s quite a good lyric. People like it. It’s connected to a story as well, so I suppose that was a unique thing."

"I wrote about the audience, our audience for the first time – which was quite unique for its day. I still think it’s quite relevant today as it was back then. I think it’s in the rock DNA, that song.

"It references people but not directly, it references Tommy Vance who used to play us on The Rock Show back in the day, and Rainbow who we supported at Donnington."

4. Power and the Glory

"The Falklands war influenced that song. It was the first album we did in America, so it was a landmark album."

"It’s a controversial song, it’s obviously about the crusades. It’s sung from a third person, like a child watching the knights go off to war and wanting to go with them. I just think historically, that song is pretty cool and it’s a great riff."

"The first album we wrote in the 90s was Solid Ball of Rock, which was quite a big album for us.

"We didn’t write the song actually, the song was written for us by a friend of mine called Bram Tchaikovsky, who used to be the guitarist for a band called the Motors and he wrote a song about Jerry Lee Lewis.

"Me and Paul took it and transposed it into more of a Saxon song. So I love that song."

"Think that struck a cord with a lot fans, new fans and older fans. It’s very British, very steeped in history. I do love that track."

"This is about the Aztecs and the Incas sacrificing people, so gorey stuff."

9. Valley of the Kings

"This is about when they discovered Tutankhamun's tomb back in the 40s."

"Again a song about audiences and storming a castle – that’s the connection!"

"This is about Greek mythology and Zeus and Krakens and all sorts of things, you know, mystical! I like history, it’s got a wealth of really great subjects to sing about and it fits the genre as well. I think probably us and Maiden have cornered the market on that subject matter!"

"It’s about the Spanish conquering South America and taking all the gold and gallions and all sorts of things. It’s a very swashbuckling song."