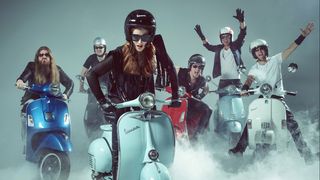 Can’t tell your Quantum Enigma from your Holographic Principle? No worries – we’ve got your back!

Epica can hardly be accused of taking things easy on any of their seven studio albums, but 2016’s The Holographic Principle was so stupendously over-the-top and sonically devastating that it felt like a wholesale reinvention for the Dutch sextet. Bigger, better, heavier and more dramatic than ever before, it’s an undeniable career peak.

Not many bands can say that their biggest crowd-pleaser is a nine-minute prog metal epic, but Epica have always been ambitious. The title track from the band’s breakthrough second album, Consign To Oblivion, is pretty much everything you need to know about what Epica do, and confirmed that Simone Simons was one hell of a singer.

When a band has their very own festival, you know things are going well. On November 22, 2015, Epica held the first Epic Metal Fest in Eindhoven, celebrating the end of their latest tour alongside bands such as Fear Factory, Periphery and Eluveitie. In 2016, they held events in the Netherlands and Brazil, and more are planned for the future.

If Nightwish are the Frozen of symphonic metal, Epica are The Matrix, eschewing fairytales and fantasy for virtual reality and quantum physics. “We’ve always had scientific and philosophical topics in our lyrics,” Simone notes. “We hope we can tickle the fans’ imaginations, and get them to start thinking about the deeper meaning of things.”

In addition to co-vocalist Mark Jansen’s infernal growls (not to mention his symphonic death project Mayan), both drummer Ariën van Weesenbeek and lead guitarist Isaac Delahaye are former members of Dutch death metal stalwarts God Dethroned. Epica are heavy as fuck. Listen to Universal Death Squad on The Holographic Principle if you don’t believe us.

Who is the real Simone Simons? Fronting Epica for 15 years, we find out how life has changed for the singer – only in the latest issue of Metal Hammer. Buy it directly here or become a TeamRock+ member to read it right now.

Who is Simone Simons? Getting to know Epica's enigmatic frontwoman