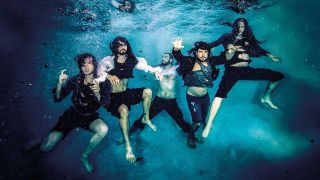 It’s the quintessential festival scene: a field in Europe, thousands of faces stretching into the distance, all captivated by the spectacle onstage. A band, instruments in hand, feeding on the din as everybody roars along to every word. Heads bang. Horns are raised. Bodies… row? This isn’t Metallica, Iron Maiden or Guns N’ Roses playing a headline set – it’s Alestorm at Graspop 2017.

“There was a sea of humans – humans as far as the eye could see,” says Alestorm vocalist (and only remaining founding member) Christopher Bowes, remembering the band’s insanely oversubscribed set. “The set-up is two stages side-by-side, and we could see people watching us from the far end of the wrong stage – it was ridiculous!”

Common sense dictates that any metal band who can shift over 500,000 records worldwide, fill fields and clubs alike throughout Europe and beyond, and potentially lay claim to kickstarting a whole subgenre would be a Big Deal. But with Alestorm, common sense seldom comes into play. Largely dismissed by critics as a joke band, the band are nonetheless going strong on the 10th anniversary of their debut, Captain Morgan’s Revenge. Fifth album No Grave But The Sea, released last May, reached their highest chart positions yet and led to a summer of festival madness. It’s fair to say that this is more than just a flash-in-the-pan gimmick thing, then.

“We just have fun,” Chris explains. “I think it helps that we’re not cool; by the very essence of being cool, you have to be not cool at some point. We’ve always been sad and embarrassing, so people can just stick with us forever.”

Christopher is both self-deprecating and good-humoured, frequently joking about how ludicrous it is that he has been able to build a whole career out of singing metal songs about pirates – all stemming from a single song that he wrote at high school in Perth, Scotland. “I was, like, 16 or 17. At lunchtime, when everybody would go out and smoke, drink and party, I was just sitting in a music room playing piano like a good little nerd. I came up with a song that was essentially a drunken sailor song, but metal,” he remembers. “It’s funny, because it’s probably the most important thing I’ve ever done – this stupid little song became the basis for the last 10 years of my life!”

The song – Heavy Metal Pirates – actually pre-dates Alestorm, and was originally written and released for Christopher’s first band, Battleheart. Decidedly more power metal-oriented than Alestorm, Battleheart nonetheless laid the foundation for the more bombastic sound that would bring Chris and co so much success – and before you ask, no, they weren’t influenced by long-running, history-obsessed metallers Running Wild.

“In our early days we were compared to Running Wild a lot,” Christopher says, clearly exasperated with the comparison. “It’s kind of ridiculous when you consider that they’re a German speed metal band and most of their songs aren’t even about pirates. Sure, they sang about pirates, but Led Zeppelin sang about Vikings and you don’t hear people say, ‘Oh, Amon Amarth! You’re just ripping off Led Zeppelin!’”

Instead, they channelled the wave of Finnish folk metal that was gaining momentum, taking inspiration from Korpiklaani, Ensiferum and Turisas, and adding in the over-the-top sound of countrymen such as Children Of Bodom.

“We brought a lot together for our sound,” says Chris. “At the time in Scotland, a lot of the local bands were playing hardcore, metalcore and sludge – lots of downtuned riffs. We had big, stupid melodies and solos, so we decided, ‘Right, that’s it – let’s be different, and make something that sounds like it should be made in a forest in Scandinavia.’ It eventually morphed into something about pirates and got a bit out of hand...”

Their transformation into pirate metal pioneers almost complete, Battleheart changed their name to the punnier Alestorm, quickly secured a record deal (“They said, ‘This sounds great – we can market the crap out of pirates!’” Christopher laughs) and set out on their first-ever tour in March 2008. But it wasn’t all smooth sailing. At their first gig, supporting Turisas and Norther in Northampton, Chris’s keytar strap broke as soon as he walked onstage. “I was nervous – as you can fucking imagine – and my keyboard falls off. Going from there to here, it’s fucking nonsense.”

The tour might have been a baptism by fire, but Alestorm managed to solidify their buccaneering reputation. And with those first shows came their first fans. “Fifty people chased our little camper van down the street saying how awesome we were,” Christopher remembers. “We’d never been on tour, so we thought that was just how it was. It took us a while to realise that there was something special going on.”

By the time the band played their first Graspop in June 2008, thousands of fans were turning up to sing along to songs that had only been around since January of that year. Alestorm were ready to hit the high seas. “It blows my mind, getting to go to daft countries,” Christopher marvels. “I never thought in my wildest dreams that I would get to tour the world and not have to mortgage myself to do so.”

What was once a single fun song on an EP had become an entire subgenre, with similar bands appearing around the world. Pirate metal was born. “I do wonder about that sometimes,” Christopher admits. “But there are bands like Swashbuckle who have been doing it a little bit longer– they started at the same time as us, totally coincidentally. I think it’d be silly for us to take all the credit, but I do feel like the wider scene is our fault, in a way.”

Love it or loathe it, pirate metal has certainly shown its staying power over the past decade, confounding critics as to how a simple gimmick could enjoy such longevity. In the 10 years since releasing their debut record, Captain Morgan’s Revenge, Alestorm have built one of the most vocal – and visible – fanbases in metal. Their last three albums have entered the charts, with No Grave... landing Top 50 positions in the UK, the US and Germany. Their Spotify Top 10 tracks boast well over a million plays each, with the top song, Drink, hitting the 10million mark.

While Christopher is upfront about how ridiculous his band are, there’s no denying he speaks with pride, and is quick to defend the wider genre from detractors. “We do the metal thing first, pirate second,” he says, resolutely. “What’s wrong with wanting to be in a band and have fun? I know what we do is a little bit stupid, but at the end of the day I like to think it’s well-crafted; it’s serious music but with a very whimsical approach.”

Metal is full of bands who are able to embrace the genre’s most ludicrous elements and capture the imagination nonetheless. Iron Maiden have forged a near-40-year-career doing it, Amon Amarth headline festivals because of it and Ghost embody its enduring appeal. The success of Alestorm isn’t anomalous – it’s coded into metal’s very DNA to love something unabashedly joyous and heavy. And they’re still rising.

“I’m glad that we didn’t hit our peak three albums ago,” Christopher says. “It’s on the up and up, and shows are still getting bigger. I like to think we put on a good show, too – we do have an inflatable duck, after all.” It might not be Eddie just yet, but the band do have big plans for the future. “If we ever headline a UK festival, we’ll get a giant duck. But until then, our seven-foot one is fine.”

You heard it here first, folks. Alestorm in the running for Bloodstock 2020 – after all, there’s plenty worse that could happen that year…

Alestorm are playing the main stage of Bloodstock on Saturday August 11. Tickets for Bloodstock are available now.