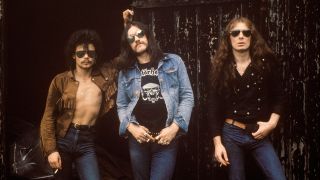 Like a lot of people from my generation, my first memory of Motörhead is seeing them perform Ace Of Spades live in the living room on the University Challenge episode of The Young Ones.

I remember thinking, ‘Who the hell is this cool guy making all this racket with the warts on his face, wearing a bullet-belt, skin tight jeans, and wearing shades indoors?’

But it wasn’t until a few years later that I properly fell in love with Lemmy and his band of hellraisers. They’ve been a staple of British rock and metal now for 40 years. Original, inspirational and one of the greatest bands this fair isle has ever produced, Motörhead set the standard for sleazy, dirty, greasy, boozed-up rock ’n’ roll.

The personnel may have changed over the years, and everyone has their favourite line-up, but the material has always been 100% quality. You always knew exactly what you'd get from a Motörhead album and they never disappointed – and they wouldn’t have given a fuck if you didn’t like it anyway!

They are still one of my favourite bands ever, and an obvious influence on the music that I’ve made with Orange Goblin over the years. So when I was asked to pick 10 of my favourite Motörhead tracks, I wanted to try and avoid the obvious stuff that always gets mentioned. We all know the classics: Ace of Spades, Overkill, Bomber and so on, so here’s a selection from the rest of their incredible catalogue that still gets me going, gives me goosebumps or just simply makes me want to destroy everything in my path.

This overlooked track is probably the closest Motörhead will ever get to an actual ‘love song’. The lyrics, the chorus, the sentiment and the conviction in Lemmy’s voice just blow me away. It’s so melodic and heartbreaking and shows that there’s far more to the Motörhead canon than many give them credit for. This was the song that I had in mind when I wrote the lyrics for Stand For Something. I’d told Joe [Hoare, Orange Goblin guitarist] I’d love to do a song that means something to a lot of people, similar to All For You. I’d love to come up with a melody like in that chorus!

So simple, but so genius. The whole song is pretty much one riff but it’s impossible not to bang your head, tap your foot, clap your hands or whatever you do to something this good! All the instrumentation is amazing and the subject of the lyrics highlight Lemmy’s often overlooked sense of humour. It’s short and sweet, but direct and to the point.

This is Motörhead in their infant stages and at their most laid back. There’s definitely a bit of a Hawkwind vibe to a lot of the material on this album, and even in this song. It also contains possibly my favourite Lemmy lyric, when he sings ‘Loaded forever, righteously stoned’, which was then later changed to the equally brilliant ‘Wasted forever, ferociously stoned’. Both genius and this song is kind of an anthem to the outlaw biker/lifer rock ‘n’ roller lifestyle that Lemmy lived right until the end. In recent years, Wino did an amazing cover of this. I think he’s probably the only person that could do this song justice!

Another one that’s pretty similar to Damage Case in its simplicity. It’s just straight up boogie metal with some great chord changes and again you can’t help but bang you head to this song. The intro to the song is genius with Lemmy desperately muttering the words ‘….So drunk’ before it kicks in. I think that gives a great insight as to the attitude and the behaviour of the band at the time.

This has one of those awesome, catchy Motörhead riffs that breaks up the relentless speed of the material on most of their albums. The lyrics are also spot on and anyone that’s had to do shitty, long and mentally testing tours of the U.S. can relate to them. Another example of their simple, yet effective and brilliant songwriting skills, it’s basically a ‘verse, chorus, verse, chorus, middle eight, solo, verse, chorus’ song but it keeps you enthralled and interested throughout. It’s a skill that not too many bands can master. ‘Get on the bus!’

I think we can all agree that this album is the sound of the band firing on all cylinders and is full of hits. This track always stands out for me with its sleazy riff and equally sleazy lyrics. It’s easy to imagine this being a big favourite in the strip clubs and Lemmy’s lyrics are full of double entendres and sexual innuendo. The mid-section breakdown with Lemy singing ‘Let me hear ya!’ and ‘I can’t hear ya!’ is just great. A really cool song on an amazing album!

This is Motörhead at their sleaziest and bluesiest and it sounds great. A lot different to most of their material, this again showcases how versatile the band are. I think this is also one of only five songs that Fast Eddie Clarke did the vocals on during his Motörhead career. He sounds fantastic on this track and his voice suits the vibe of the song. For a band renowned for their speed, this song is so laid back and breaks up the album perfectly!

Possibly my favourite start to any song ever! That riff, Lemmy barking ‘Western Movies!’ and then the vibraslap. Awesome! Great musicianship again from all three members of the band and the lyrics give an indication of the idea behind the album cover. I love the fact that everyone thought the album cover pic was taken in some exotic location in the wild west, with the band dressed like Mexican bandits. The truth is that it was taken in a quarry in Barnet, North London!

Dancing On Your Grave (Another Perfect Day, 1983)

This song is very similar to All For You, in the sense that it’s a very melodic and heartfelt Motörhead song. It has a very distinctive 80s sound but the whole band were on fire on this often overlooked album – particularly Brian Robertson on guitar. The chorus is instantly catchy and again shows that there is far more to the band than most people associate them with. It slipped back into the setlist in the band's latter years too, so it was great to hear it played live!

It’s been so hard to just pick 10 songs for this list, as I could have easily come up with about 60. My last choice is Built For Speed. Not only is it a great song, but the lyrics to this are so relevant to Lemmy's attitude, and the moral code by which he lived his entire life: ‘I was born to rock ’n’ roll, everything I need. I was born with the hammer down, I was built for speed.’ That pretty sums up Lemmy in a nutshell. I was very fortunate to meet and hang out with the great man a few times and they’re experiences that I’ll never forget and tell the grandchildren with great pride. He’ll certainly never be replaced or matched. We should just all be thankful for the 40 years of amazing music the man and the band have given us all. Everything louder than everything else. Motörhead for life!