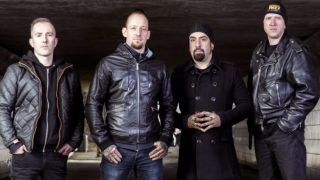 Volbeat have released a video for their track Seal The Deal.

The song is lifted from their Volbeat’s latest album, Seal The Deal & Let’s Boogie, which was released in June. The follow-up to 2013’s Outlaw Gentlemen And Shady Ladies was introduced with the lead single The Devil’s Bleeding Crown earlier this year.

Volbeat guitarist Rob Caggiano previously said of the song: “We already had the album title before we wrote this song and as is the case with all these songs, they came together musically before we had any lyrics. But this song, to me, very much has the spirit of Motorhead in it.”

Meanwhile, Volbeat vocalist Michael Poulsen recently admitted he misses the “old school” days of the underground metal scene, when he was in Dominus. He added that he wouldn’t rule out a return to his heavier roots in future.

He said: “It could happen. It’s all about timing and having the right time to do it.

“We’re very busy in Volbeat, touring around the world. It takes a lot of my energy and time to write for Volbeat and go on the road. But I have some good friends in the death metal community and we’re talking about doing something together.”

Vobeat are currently touring in support of their latest album, Seal The Deal And Let’s Boogie. They’ll tour the UK with Alter Bridge later this month.

What is the new Volbeat album all about?