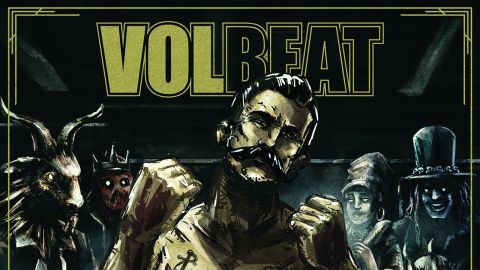 When Volbeat first evolved from death metallers Dominus in the early 00s, there was no one else quite like them.

Metallica meets Elvis? No way! Twelve-ish years and six albums in, the jaunty Danes have exceeded all expectations with tours and festival appearances around the world. Their last album, 2013’s Outlaw Gentlemen & Shady Ladies, saw former Anthrax guitarist Rob Caggiano officially join the band and even featured a track with King Diamond.

Seal The Deal… carries on from there, opening with some seriously explosive riffage on brilliant lead track The Devil’s Bleeding Crown. Volbeat’s rock‘n’roll roots are very much intact but the album shimmers with a variety of bonus enhancements. There are some slick Slayer riffs on the singalong The Gates Of Babylon, a Ramones-inspired tribute in the shape of Rebound and even the poppier Goodbye Forever, featuring guest vocals from underground Danish singer-songwriter Mia Maja. The only criticism is that Seal The Deal… recycles a lot of riffs, melodies and vocal lines from Volbeat’s previous output, which isn’t entirely surprising given their strong musical identity. But are the band running out of ideas, or just sticking to a formula that works perfectly? Either way, Volbeat were born to boogie.