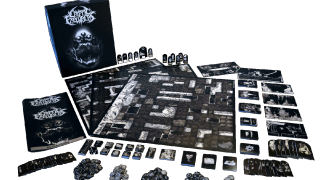 Creators of a ‘death metal board game’ called Cryptic Explorers have launched a Kickstarter appeal to help get the product off the ground.

Cryptic Explorers is described as “a competitive, asymmetrical, sci-fi/horror tabletop board game for two to four players.”

The description continues: “In Cryptic Explorers, one to three to players take on the role of Cryptonauts – explorers of the unknown – tasked with entering the Realms Of Death to steal occult knowledge and escape back to Earth.

“Opposing the Cryptonauts is a single Deity Of Death player, a malicious and powerful Goddess who seeks to kill all the Cryptonauts before they can escape with her Realm’s occult secrets.”

The game comes with a 40-page rulebook, a 10-page Realm Guide, four six-sided dice and countless tokens, cards and counters.

And many of the cards in the game make reference to metal bands such as Entombed, Mayhem and Obituary, among others.

One of the people behind the game, Maher Sagrillo, tells TeamRock: “The fungal Deity of Death called Mycothis has an ability called Slowly We Rot, a reference to the famous Obituary album of the same name.

“The crypt Deity called Sk’Zaak has an ability called Life Eternal, a reference to a classic Mayhem song found on De Mysteriis Dom Sathanas, and another called Entombed, referencing the band by the same name.

“There are many artefact cards referencing metal bands, songs and albums. Windhand Wand refers to the doom metal band Windhand. Iron Baphomet refers to a Black Witchery song of the same name, Blood Skull to a song by black metal band Old.

“Lurker’s Chalice refers to Lurker Of Chalice, a great album by Wrest, the same guy that heads up the black metal band Leviathan.”

Sagrillo explains that the game’s creators are all metalheads and that they wanted include metal references in the gameplay.

He says: “With Cryptic Explorers, we really wanted to create a turn-based tactical game with the customisation and squad mechanics of a game like XCOM: UFO Defense, and similar turn-based PC games.

“After drafting the game out and prototyping it a few times, it became a game about exploring death and trying to keep your soldiers alive to tell the tale of having ‘crossed over’ to the realm of the dead.

“Naturally, being huge metalheads into lots of extreme metal, we thought a ‘necro’ aesthetic hearkening to high-contrast black and white album covers like Darkthrone, Blasphemy, Bathory etc would fit the death-related theme.

“It’s a tough sell showing people a fully black and white board game with an extreme metal aesthetic. Board games are mostly a family-friendly sort of hobby and there are not a ton of board games, very few in fact, with any sort of metal influence, so people are hesitant when they see the creepiness.”

He continues: “We’ve done a really good job with visual design though, and in many plays and conventions never had issues with the monochromatic theme. Most people comment that it really draws them into the world, and that it’s a very unique world for a board game setting.

“It’s really fascinating to see board gamers sit down and play Cryptic Explorers without having heard any metal before, or enjoying it, and still getting into the macabre idea behind it. It turns a lot of heads.”

A gallery of images showing the game’s packaging and box contents can be viewed below. And the Cryptic Explorers Kickstarter page has a range of options for how to back the project.