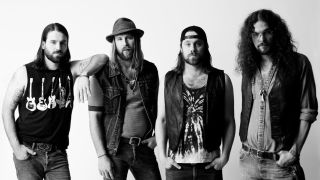 Monster Truck are premiering their new For The People video with TeamRock.

The video release comes as the Canadian rockers announce a UK and Ireland headline tour for March of next year. View the animated For The People promo below. The songs is taken from the band’s recent album Sittin’ Heavy.

Frontman Jon Harvey says; ‘“We wanted the video for For The People to capture a certain vibe. The song was intended to be a pseudo-protest and very roots rock and the 70s style animation seemed to speak that. Besides nothing is cooler than hand drawn animation.”

Guitarist Jeremy Widerman adds: “We wanted to try something new with the video and have a somewhat playful take on what is a really heavy topic these days. A throwback video of sorts to a time when the unifying of people and ideas was a far more popular subject.”

The UK tour kicks on on March 13 in Belfast before a show in Dublin and six more in the UK. Tickets are available now.

"I hope we'll be the standout band of the era!" – Monster Truck's rise continues