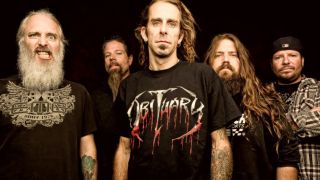 Lamb Of God’s unchanging lineup has been a key to their success, according to guitarist Mark Morton.

The lineup of Lamb Of God has remained relatively unchanged since the mid-90s – when the band were still known as Burn The Priest. Describing the “continuity” of the members as a “big asset,” he says the band have been able to collectively hone their craft over time and build upon their past work together.

Morton tells Blunt Mag: “I think that it’s a huge part of our ability to keep things going, because I think that when you change members. I don’t want to take anything away from, or criticise bands that do that – because sometimes you have to – but for us, I consider it a big asset that we’ve had that continuity.

“It allows us to develop and mature both as people and creatively, so we can always build on what we’ve done with the album before or the tour before. It gives us a really, really stable base to build off of. It can’t be understated how important that is to the success of the band, and what we’ve been able to achieve creatively.”

Morton has previously spoken about the reasons behind changing their name from Burn The Priest to Lamb Of God in 2000. Now he credits their name change with helping them emphasise their music rather than an attempt at “shock value” – and adds that is a “miracle” how far they’ve come.

Morton says: “Back then, we were playing basements, and warehouses, and coffee houses and pizza shops – pretty much anywhere that we could play. I definitely remember doing shows where I was setting up my amp next to someone’s living room couch.

“I remember nights that I was sleeping at a rest stop on top of my equipment. That’s what it was like.”

He continues: “I can tell you that Burn The Priest was an absolute tornado of energy. It was a phenomena – a juggernaut, and it’s something that I was super proud to be a part of. But it seemed like the name tended to garner more attention than what we were doing musically.

“We kind of fell into the legacy of the heavy metal and hardcore punk bands that we looked up to, but there also wasn’t much shock value because we felt that the attention should be placed on the music. But when we changed the name to Lamb Of God, we sort of changed our focus, and it became it’s own thing.

“We were just these wayward musicians that were living off of beer and whatever someone would give us, and we were just living to play our music. The fact that we’ve attained the kind of success that we have now is nothing short of a miracle.”

Fans have recently been able to listen to Lamb Of God’s new track The Duke, which is taken from the band’s upcoming EP of the same name. The Duke EP will be released on December 2 in honour of a fan who died after fighting cancer for five years.

Lamb Of God's Long, Strange Road Out Of Hell