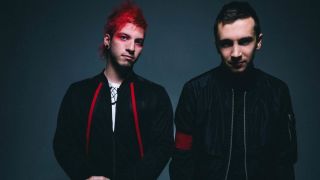 Twenty One Pilots fans may face prosecution for downloading the leaked Suicide Squad song Heathens before its release date.

Atlantic Records, who were forced to launch the track early, have filed a motion asking user-generated site Reddit for the IP address of the person who leaked the song. They say the track was sent out to a small sample group from within the band’s label – and they believe the leaker is either a label employee, on the management team or in the band.

Though many fans using the #TheCliqueGoesToJailParty hashtag joked about the prospect of facing a jail term for unlawfully downloading Heathens, their concerns are not without ground. According to the Recording Industry Association of America, people who make unauthorised copies of copyrighted music can be subjected to civil and criminal liability.

Those who break the law can face up to five years of jail time and a fine of up to $250,000. While Atlantic Records are currently pursuing the original leaker only, the Recording Industry Association of America’s website states: “It’s never okay to download unauthorised music from pirate sites (web or FTP) or peer-to-peer systems, such as BitTorrent.”

Last year Nightwish said they felt “violated” after their track Elan was leaked before its official launch.

In 2009, music blogger Kevin Cogill pled guilty to copyright infringement for leaking part of the Guns N’ Roses album Chinese Democracy. He was sentenced to two months of home confinement and a year of probation.

Twenty One Pilots are currently touring the US before appearing at the Reading and Leeds Festivals in the UK later this month.

Twenty One Pilots go on a Ride