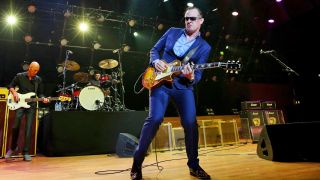 It’s the third occasion he’ll have appeared at the iconic venue, following performances in 2009 and 2013.

His latest live commitments come after his Salute To The British Blues Explosion tour, which saw him paying tribute to the work of Jeff Beck, Eric Clapton and Jimmy Page.

Last month he revealed that he knew the location of the guitar stolen from Clapton after he’d recorded the Bluesbreakers’ Beano album in 1966.

Bonamassa said: “It’s in a collection on the East Coast of America – that’s all I can tell you and that’s all I will say.”

He plays the Albert Hall on April 20 and 21 next year. Tickets go on general sale at 9am GMT on August 5 (Friday) via the Albert Hall, his own website and Ticketmaster.

An Interview with Joe Bonamassa: “My guitar playing has never been so good…”