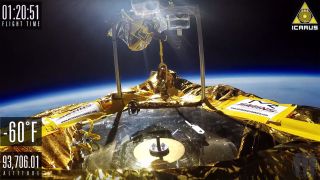 The first vinyl record has been played in space after Jack White’s Third Man Records launched a custom-built turntable by balloon.

And he hopes the feat – completed over four years with the help of engineer Kevin Carrico and the Students And Teachers In Near Space organisation – will prove inspirational among music fans.

White last month announced the project as a way to mark his label’s seventh anniversary and third-millionth record pressing.

The balloon burst after 81 minutes of flight and Icarus fell to Earth under a parachute – and it was still playing the record when it was recovered.

White said: “Our main goal was to inject imagination and inspiration into the daily discourse of music and vinyl lovers.

“It was exhilarating to do something that hasn’t been done before, and to work towards in completion.”