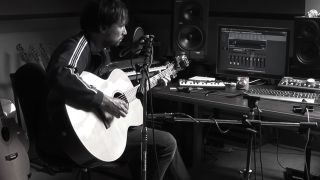 The Pineapple Thief have released a video of mainman Bruce Soord performing an acoustic version of their track Tear You Up.

The song originally appeared on the band’s 11th studio album Your Wilderness, which launched last month via Kscope.

Soord says of the alternative version of the track: “People always ask me how I write songs and I always say the same thing – with my acoustic guitar.

“I thought taking one of the heavier tracks on the album and giving it the singer, songwriter treatment would be a nice way of showing this.

“It was also a lot of fun to do, although the sigh at the end, as I played it live in the studio, is a result of it taking quite a few takes to get right!”

The follow-up to 2014’s Magnolia featured a number of guest musicians, including drummer Gavin Harrison, who Soord credited with giving the band a new focus in the studio.

He said: “This has not only redefined our sound but also redefined how we approached the songs as a band. Gavin’s drumming is technically brilliant but also incredibly musical, and it inspired all of us to raise our game.”

Soord added: “I’ve also rediscovered my progressive roots in terms of songwriting and arrangement. Added to that, we were lucky enough to have John Helliwell from Supertramp contribute some beautiful clarinet parts and Geoffrey Richardson provided a string quartet.

“We were also joined by a lovely four-piece choir and to cap it all off, my friend Darran Charles from Godsticks added some jaw dropping guitar playing.”

The Pineapple Thief previously released a video for Your Wilderness track In Exile, along with a lyric promo for No Man’s Land.

The 10 best songs by The Pineapple Thief, by Bruce Soord