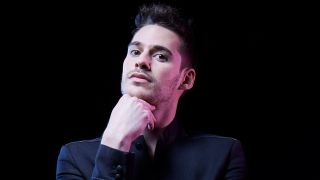 Joe Payne has revealed his “heartbreaking” decision to leave The Enid after five years, following the band’s announcement of the lineup change.

He’d been the band’s only lead vocalist since Robert John Godfrey founded the symphonic rock band in 1973, and appeared on their most recent albums Journey’s End, Invicta, First Light, The Bridge and Dust. He was also responsible for co-writing, management, live artistic direction and promotional duties.

In a statement exclusively revealed to Prog, he’s confirmed that he had to move on after his commitments seriously affected his health.

The band said at the weekend: “Joe Payne has left The Enid. We wish him well and are proud of the work we did together. The success of The Enid has always been our capacity for reinvention. A new chapter is being written, ablaze with the fires of change.”

Payne tells Prog: “After five incredibly challenging and rewarding years together, I’ve made the decision to move on from The Enid to focus on my own projects.

“Shortly after the Dust tour finished in April, I was hit hard by the symptoms of depression, for the first and only time in my life. Years of personal events which were completely out of my control had led to ever-building anxiety levels. I had raised the threshold to which I could cope – I told myself it was all for a greater good, and I battled on for those around me.

“Unfortunately, nothing good can really come from being ‘strong for too long’. When you ignore the warning signs your mind is trying to alert you to, your body will inevitably shut down.

“I had reached the point of needing medical help. That moment is one I look back on as traumatic – but I carry no shame about it. I am aware now that this happens to the best of us, and I expect many people reading this will empathise with the condition.

“While this was a heartbreakingly difficult action to take, I hope that anyone who is saddened by the news will respect that my health had to be put first. Leaving the band was a step paramount to my wellbeing.”

Payne describes his crisis point as “shocking” but adds: “It was the wakeup call I needed. I am not by nature a depressive person, and accepting that certain aspects of my life were unhealthy was the first step to my recovery. I have made the necessary adjustments. I am detoxing. My smile is bright and my eyes are wide.

“With great relief I can confirm that I am now more or less back to my old self. There’s been months of personal development – but I no longer need medication, I have started playing and writing music again, and my self-esteem is at its highest in years.”

Thanking fans, family and friends for their “humbling” messages of love and support, he continues: “I hope you will all continue to support my best friends, Dave Storey, Dom Tofield, Duncan McLaughlan, Jason Ducker, Josh Judd, Max Read and Zach Bullock as they enter a new chapter for The Enid ,and continue to make progressive waves in music. I love those guys, and feel so proud of the things we have achieved together.

“My priority now is to make a new record. This journey is going to be emotional – but that’s a good thing!”

Payne has launched a temporary blog until his official website is launched. He’ll reveal details of his solo project in due course. The Enid, as a mainly instrumental band, are working on an album based around music written by Godfrey and guitarist Ducker. They continue to mark the 40th anniversary of debut album In The Region Of The Summer Stars with a run of UK shows in the coming weeks: