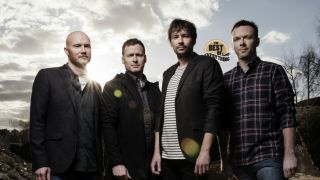 The Pineapple Thief were formed by Bruce Soord in Somerset in 1999.

The quartet have since released 10 studio albums, their most recent being Magnolia, which was released in 2014.

Soord, who released his self-titled solo debut last week, picks the 10 best cuts from the band’s back catalogue.

WE LOVE YOU (Little Man, 2006)
** Bruce:** ”Earlier in our career I loved to write songs with a long, building outro tagged on the end. This is what a lot of rock bands were doing in the early 2000s and this is a classic example of The Pineapple Thief giving it a go. I don’t do this any more, simply because I think there are more interesting ways to build a song. Still, this one still works for me, not to mention the electronic and guitar arrangement of the first section.”

NOTHING AT BEST (Someone Here is Missing, 2010)
“I do enjoy a good pop rock song and this is probably the best one we’ve done. This also shows how we try to fuse rhythmic synth parts into rock music. Not always easily done. But I think it works here and is also great fun to end our live set with.”

**THE ONE YOU LEFT TO DIE (Magnolia, 2014)
**“One of our more recent songs, this hints at the influence minimalist composers have had on my song-writing (see We Subside), especially Steve Reich. I’ve always enjoyed building an atmosphere over a drone and again Andrew Skeet adds to that atmosphere with his strings.”

PART ZERO (Variations on a Dream, 2003)
“This was back in the day when I did everything alone in my home studio. A simple song about the futility of attempting to do something important in one’s life. It seems to have struck a chord with many fans and we still play it live today. Again, this has a bit of an outro with a – whisper it – long guitar solo. But I’ll forgive myself this one…”

**REACHING OUT (All the Wars, 2012)
**“The Pineapple Thief are regarded as a progressive rock band, but we do sit on the fringes of that world. This is a typical example. It’s nearly 10 minutes long and goes through three or four different moods. But it’s not exactly Dream Theater. Still, I’m happy to call it progressive and the chorus still stands out as one of my favourite ever TPT moments.”

**CLAPHAM (10 Stories Down, 2005)
**“I wrote this song while standing on a platform at Clapham Junction station in London, hence the name. It’s a simple song really, but one that still has a fond place in my heart. It was a song about trying to give hope to people around me who had lost all hope.”

**ALONE AT SEA (Magnolia, 2014)
**“I’ve had a soft spot for 7⁄8 over the years and this rockier number is an example, although it does move between 7 and 4 quite a bit. What makes this ‘progressive’ are the various movements the song goes through, ending with a riff rock outro that I thoroughly enjoy playing live. But it is a bit of a naughty indulgence…”

137 (137, 2001)
“This track is from way back towards the beginning of my Pineapple Thief journey. I was still finding my musical feet but this is an example where I threw a bunch of ingredients into a pot and it worked – for me at least. Again it’s progressive and I think, pretty interesting in its arrangements.”

**THE SORRY STATE (Tightly Unwound, 2008)
**“There are loads of tracks off Tightly Unwound I would include here, but I’m choosing this one because my friend Jonas [Renkse, vocalist] from Katatonia had it on his dressing room playlist when I gatecrashed one of their shows a few years back. I hadn’t heard the song since I recorded it and I forgot how simple and catchy the song is. I especially like the guitar break. I try to do ‘guitar solos that aren’t solos’, and this has one of those attempts….”

ALL THE WARS (All the Wars, 2012)
“This is from the ‘acoustic’ wing from the The Pineapple Thief archives but has to be my favourite. It’s incredibly simple really, three chords make up the verse, three chords make up the chorus. What makes it slightly more unusual is that the time signature changes from 4⁄4 to 7⁄8 when it enters the chorus. But hopefully no one ever consciously notices that. This track worked when I wrote it on the acoustic guitar, but it was Andrew Skeet’s string arrangements that really took it to another level.”