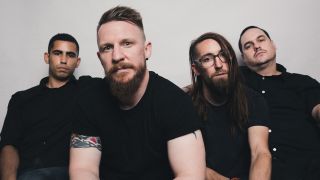 Temples On Mars have released a video for their new single titled So In Love With Your Own Drug.

The London-based outfit changed their name from Agent in December, with the track featuring on the band’s as-yet-untitled debut album which is expected to launch in April.

It’ll be released via Primordial Records after Temples On Mars signed a new deal with the label.

Frontman James Donaldson says: “We are extremely excited to be releasing the first Temples On Mars single and accompanying video.

“We are really proud of this track and the video has come together quite nicely as well.

“The song itself alludes to the status of modern society. People are just so absorbed in themselves, the media, getting likes and comments, that they are forgetting how to live, how to interact with each other, and forgetting the basics of what being human is all about.

“Like drugged up zombies sleep walking into extinction. You won’t even notice.”

Head of Primordial Records Alex Boezeman says he’s excited to be working with the band, and adds: “The album we’re releasing soon takes you on a great trip through the musical landscape that is Temples On Mars.

“It’s progressive yet accessible and an absolute joy to listen to, front to back.

“They are a great addition to our diverse roster and I can’t wait to get their new music out there for everyone to enjoy.”

Temples On Mars will hold a relaunch show at The Black Heart in London on Saturday (January 27) supporting Exist Immortal.