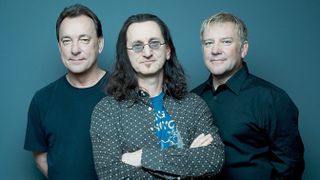 Alex Lifeson has confirmed that Rush have no plans to tour or record together in the future.

The future of the band was thrown into doubt when drummer Neil Peart described himself as “retired” in 2015 following Rush’s North American R40 tour.

Guitarist Lifeson and vocalist and bassist Geddy appeared to accept another large scale tour wouldn’t happen, with Lifeson’s new comments confirming that nothing new will come from the trio going forward.

He tells The Globe And Mail: “It’s been a little over two years since Rush last toured. We have no plans to tour or record any more. We’re basically done. After 41 years, we felt it was enough.

“But I’ve actually been busier lately than I have been in a while. I’m writing a lot. I’m writing on four or five different little projects. I get these requests to do guitar work with other people.

“It’s really a lot of fun for me. It’s low pressure: I get to be as creative as I want to be and I can work a little outside of the box, which is really attractive to me.”

Lifeson also reveals he’s writing a column for new Toronto newspaper the West End Phoenix and adds: “It’s fun to put yourself in an uncomfortable situation. If you have a little bit of confidence and you just get out of your own way, these things can happen.

“The same thing happened when I got asked to do a small role in a TV show, Crawford, a new comedy on CBC from Mike Clattenburg, who created Trailer Park Boys.

“I thought I couldn’t do it – that it was something for real actors. But I ended up doing a few episodes. It definitely was not in my comfort zone. But if you throw a challenge at yourself and dive into it, it can be really gratifying.

Rush released the movie Time Stand Still in December 2016, and last year celebrated the 40th anniversary of A Farewell To Kings with a lavish deluxe box set.