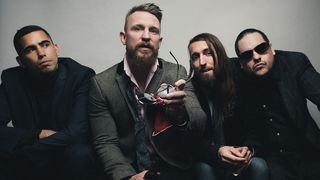 London-based outfit Agent have announced their return with a new name.

Going forward, the band will go by the name of Temples On Mars and they’ve lined up a relaunch show at The Black Heart in London on January 27 supporting Exist Immortal.

Speaking about why they decided to rebrand, Donaldson says: “We felt that with all the changes in the band and with the evolution of the music industry compared to when we first started, it was time for us as individual musicians to adapt and evolve.

“We weren’t standing out online, especially on Google and Spotify where it counts, so we decided to take the plunge, relaunch the band, and reinvent ourselves a little bit along the way.

“We are really excited about these changes. We have a new lineup, a new video imminent, and a brand new album burning a hole in our pocket all ready for the start of 2018.

“This is a new band. We are Temples On Mars.”

The band have also released a short off-the-wall video to introduce the new-look lineup which can be seen below.

Tickets for their London show are available via The Black Heart.