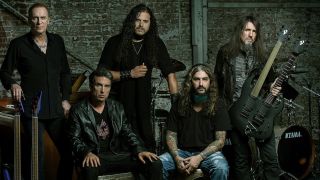 Sons Of Apollo have released a video for their new track Lost In Oblivion.

Portnoy says: “I can’t believe it’s finally here! The Sons Of Apollo debut album is finally out! This album has a little bit of something for everybody – classic rock, metal, prog… it’s a musical feast for the ears.

“To prime everybody for the release, we’re excited to debut the video for Lost In Oblivion. This song is full-on energy, excitement and shred!

“From that crazy double bass drum pattern that took me forever to perfect, to the insane bass and guitar unisons throughout the song, to Jeff’s always-hooky chorus, this song is another great example of what this band is about.

“We can’t wait for everybody to finally have the full album this week and we look forward to hitting the road in 2018 – playing all around the world all year long!”

Last month, Sons Of Apollo were confirmed on the bill for next year’s Be Prog! My Friend.

Are Sons Of Apollo prog's most exciting new supergroup?