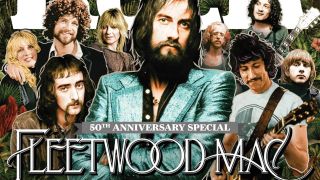 One band, a myriad of eras and a whole lotta moving and shaking going on. Classic Rock’s latest cover feature celebrates half a century of Fleetwood Mac, beginning with Mick Fleetwood taking us through his band’s early blues years. Then we move on to the crazy drama of the multi-platinum, drug-addicted worldwide hit machine years, and beyond… and there’s a whole lot else in our new issue.

Foo Fighters
Dave Grohl was supposed to spend 2017 taking some time out. Instead he ended up with a new Foos album exploring his darkest thoughts.

Chris Rea
Rock’s great survivor on industry sharks, strokes, cancer and why he’s earned the right to sing the blues.

Thin Lizzy
They were just another rock band, then they released Jailbreak and joined the A-listers. Now they had to stay there.

Bruce Dickinson
Fencer, author, pro pilot, cancer survivor… He’s not just the frontman with one of the world’s biggest bands, you know.

Tyler Bryant
How a chance meeting as an 11-year-old lead to him becoming a shit-hot guitarist and playing with some of rock’s superstars.

Lou Reed
Moving to London and hooking up with Bowie, they created the classic Transformer, the defining record of Lou’s career.

The Bands Play On
15 brand-new tracks of high-voltage rock’n’roll to put the cat among the pigeons, including Sun Kings, Black Mambas, Neon Animal and more…

The Dirt
Classic Rock bids a heartfelt goodbye, and thank you for the music, to Walter Becker, one half of Steely Dan… How to get Gene Simmons to visit your house ($50,000 is all it takes)…Welcome back H.e.a.t, Gentle Giant and Galactic Cowboys… Say hello to Lukas Nelson and Gold Key, say goodbye as well to Holger Czukay, Dave Hlubek, Grant Hart, Don Williams…

Raw Power
Gibson guitars and watchmaker Raymond Weil team up for a timepiece that pays tribute to an icon: the Gibson Les Paul.

The Stories Behind The Songs: The Cranberries
How a storming left-turn, an incendiary, furious track about the bombings in Northern Ireland, made them massive.

Q&A: David Crosby
The political and outspoken former Byrd on protests, life and death and the Pope possibly being a big fan.

Six Things You Need To Know About Kadavar
Their face fuzz gets them into trouble and their new album, Rough Times, is a first-class trip. Meet the beardy Berlin trio.

Buyer’s Guide: Mick Ronson
He played on some of Bowie’s greatest records, but the talents of the guitar great from Hull stretched much further.