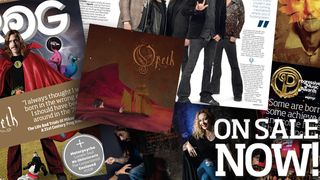 The brand new issue of Prog is on sale today, with Opeth on the front cover. We feature an in-depth, honest and open interview with band leader Mikael Åkerfeldt as he discusses the trials and tribulations he and the band have endured over the years as they became one of 21st century prog’s most important bands.

We also have an exclusive live Opeth album with this issue just for Prog readers. Unavailable anywhere else, the album was recorded with orchestra and choir in Plovdiv, Bulgaria, and features over an hour of excellent music. Opeth at their majestically proggy best.

Progressive Music Awards - The winners. The stories. The gossip. All the news from prog’s biggest night of the year!

The Contortionist - US sextet journey further into prog territory with new album Clairvoyant.

VUUR - Anneke van Giersbergen is back with new heavy yet proggy project.

Brand X - Reunited after 17 years, the jazz fusion pioneers are back on the road!

Amplifier’s Sel Balamir - gives us a glimpse into his prog world.

Mike Scott and The Waterboys - are they prog?

Get this issue here or subscribe to print or digital packages here.