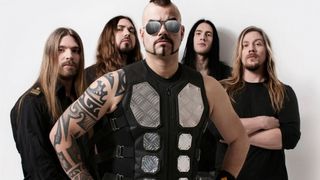 Sabaton have released a live video showcasing their track Art Of War.

It was filmed at Nantes’ Stereolux venue in France earlier this year and features on the bonus DVD included on the Digibook and Earbook versions of their upcoming eighth album, The Last Stand. The album takes its inspiration from famous defensive ‘last stand’ battles.

The follow-up to 2014’s Heroes is due out on August 19 via Nuclear Blast. It can be pre-ordered now.

It also follows the lyric video for the song The Blood Of Bannockburn.

Bassist Par Sundstrom said of the Peter Sallai’s cover art: “We had the idea to make an image reflecting soldiers of different times representing the different historical battles we sing about on the new album. This only reveals a small part of the album topics though.

“We always have several ideas for albums to work with. Since there are countless different views and angles of war, we will unfortunately never run out of ideas. We felt that the last stand was something perfect for Sabaton. Heroes was a perfect theme and The Last Stand is right down our alley too. It was exciting to do the research.”

Sabaton are scheduled to play Heavy Montreal, Canada, this weekend before heading to Europe for a run of shows. They’ll then tour with with Accept in 2017.