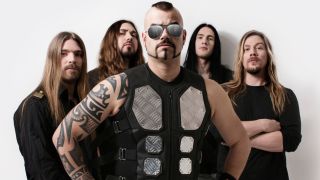 Sabaton have released a lyric video for their track Blood Of Bannockburn.

The song from the Swedish band’s upcoming eighth album The Last Stand tells the story of the landmark Scottish victory over the English in the 1314 battle.

Sabaton share details of the historic fight: “Nine years after the execution of William Wallace, the Scottish laid siege upon Stirling Castle and an agreement was made that if it had not been relieved by mid-summer, the English would surrender the castle to the Scottish. The English could of course not ignore that challenge, and sent a formidable force north towards Stirling to break the siege and relieve the troops inside.

“In the end, Robert the Bruce and the Scottish defeated the English under Edward II’s command with a force half the size and not nearly as well equipped of what the English had at their disposal.”

The follow-up to 2014’s Heroes will be released August 19 via Nuclear Blast.

The concept album The Last Stand takes its inspiration from famous defensive ‘last stand’ battles. The set was previewed with the lead track The Lost Battalion, which recounts a World War One battle between American and German forces in 1918.

The Last Stand can be pre-ordered now. Sabaton are currently on the road playing shows across Europe.