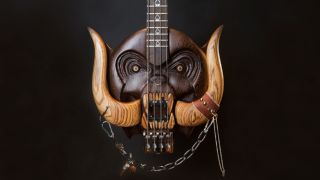 One of the specially commissioned basses

Bloodstock are set to unveil a pair of bespoke Lemmy bass guitars at next weekend’s festival.

Event boss Paul Raymond Gregory commissioned Cynosure Guitars to create two instruments as a tribute to the late Motorhead frontman – which took them six months to make. Pictures can be viewed below.

They’ll be displayed at the Rock And Metal Gallery at the Catton Park festival in the UK, which will also feature music-inspired art from other musicians.

Cynosure say: “Though stylistically very different from one another, both bass guitars represent the iconography and mise-en-scene of perhaps one of the most prodigious and pioneering rock and metal acts in musical history.”

Gregory, who is also a fantasy artist, has hand-painted a lifelike representation of Lemmy, which will be placed in the Lemmy bar over the weekend.

The Motorhead mainman died from an aggressive form of cancer last December at the age of 70.

Motorhead said: “Today we mourn the loss of our dear friend and leader, Lemmy. As he would have wanted, raise your glass and celebrate his life today along with the entire Motorhead family. His legacy will never die.”

Get The Bloodstock Look