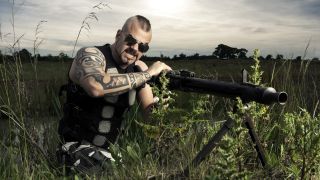 Sabaton love war movies almost as much as they like writing huge, bombastic heavy metal songs about war movies. So you can probably see where we’re going with this. We spoke to the heroic Swedes about their favourite, skirmish-centric celluloid offerings and discovered that they once had a strange falling-out with a certain dictator.

Pär Sundström (bass): “It started the whole thing for Sabaton. We watched it right before we wrote the song Primo Victoria, the title track from our first album, and so that’s where it all started. We had the music recorded for the song but no lyrics, and then we watched Saving Private Ryan and suddenly it was, ‘Ah, so that’s what we want!’ It was great, so we figured we should continue that theme in other songs. It’s an amazing movie.”

Pär: “That’s one of the old-time favourites. The song Battle Of Bannockburn on the new album basically starts where Braveheart ends. It connects to that. When you go back that amount of time, we knew that there ain’t gonna be any hard facts to use, so part of the process in writing a song like that is you have to use your imagination. It’s nice that you hear a song and certain images come into your head. A lot of our fans will think of the movie Braveheart and think the song is a part of that, and maybe that’s how they want it to be. There is the option to be absolutely correct and there’s the option to put a little imagination into it.”

Joakim Brodén (vocals): “I remember the first time I saw it, and I wasn’t very old, and you see the second-in-command’s hand being cut off… what the fuck, you know?”

Pär: “It’s a great war movie about the Spartans which we sing about on the first track on the new album, and one of those famous last stands that we were sure had to go on the album. It’s a movie and it’s based upon reality, at least some of it is. When you watch a movie you can just enjoy it as entertainment, but you can also look behind it. You can listen to our songs as just heavy metal songs or you can look deeper into the stories. If you just want to sing along, that’s cool!”

Joakim: “I know it’s not strictly a movie but it looks like a movie. We got lots of inspiration from there. There’s a bit of Hollywood spice, for sure, but these things happened for real. That gets me even more excited. Give me a war movie that has no historical connection, it has to be really good, but Band Of Brothers has all of that, the production values, and yet it’s all true. It’s probably inspired a couple of Sabaton songs over the years. To be able to use it as an inspirational source there has to be an element of truth in there somewhere.”

Joakim: “It seems that the Vietnam war was the subject of many, many movies back in the ‘70s and ‘80s, but today there aren’t many being made. There was a new Vietnam movie every two years for a while and now we haven’t seen one for a while.”

Pär: “I think Full Metal Jacket belongs in this list too.”

Joakim: “Yeah, maybe that one too! Apocalypse Now is a little bit too out-there, but then Full Metal Jacket is a little more entertaining, with more jokes, whereas Platoon focuses on the people and their experiences. That’s what I find interesting about war. It’s not just the tanks, it’s how those extreme experiences bring out both the best and the worst in people. Platoon definitely does that.”

Pär: “It’s one of the most emotional movies about World War II ever made. It becomes more emotional for us to write about certain topics. The Heroes album was definitely like that. A couple of the stories really made us think, like ‘Can you imagine what it would’ve been like to be that guy? What does it take to be a hero like that?’ Then you follow the story deeper and you realise that maybe you would’ve done the same thing, and there’s the emotional connection. You can just enjoy the battles and the daring deeds in heavy metal songs, but if you look deeper there’s more beneath the surface.”

Joakim: “People forget that how incredibly well made that movie was. I can appreciate a movie from that viewpoint and it doesn’t always have to be completely true to make the right point or tell the story.”

Joakim: “Gladiator has probably one of the best soundtracks ever written as well!”

Pär: “At the time it came out, it was one of the biggest productions that had ever been done and you just get so into it, become so absorbed. There’s that first impression of the movie, seeing the might of the Roman Empire up against some German barbarians up in the forest… here comes the might of Rome and there’s absolutely no way they stand a chance. I was connected right away and absolutely blown away when I saw that.”

Joakim: “Hollywood has a tradition that the hero always gets the girl. The hero in Gladiator’s wife is raped and killed right at the beginning. That’s a real wake-up call.”

Joakim: “It’s a two-part TV movie about the rise of Adolf Hitler, starring Robert Carlyle. I suppose it’s not really a war movie because it ends at the start of World War II, but I think it’s pretty fucking well made. I liked that a lot. I need to watch that again!”

Pär: “When I was young I loved the movie The Guns Of Navarone. Seeing it today, I’m not quite so impressed! Sometimes you shouldn’t listen to that album that was so great when you were young, you know?”

Pär: “There are all these amazing versions of the bunker scene on YouTube, all with subtitles because the original is in German. There is a very entertaining Sabaton version, where we go separate ways with an old band member just before we go on tour. Hitler finds out and gets very upset, and he’s screaming at his generals that he’s going to throw away his limited edition version of the Coat Of Arms CD! He gets even more furious when he finds out there won’t be a keyboard player in the band and it would all be on pre-recorded backing tracks. Then he was very angry!”

Joakim: “Hitler really did not like us doing that!”

Pär: “They tried to calm him down by saying ‘You can relax because Joakim is still in the band…’ but he didn’t care. Oh, and I guess I should mention that the real movie is really great too.”

Sabaton’s new album The Last Stand will be released on August 19 through via Nuclear Blast. You can pre-order the limited edition vinyl editions here.