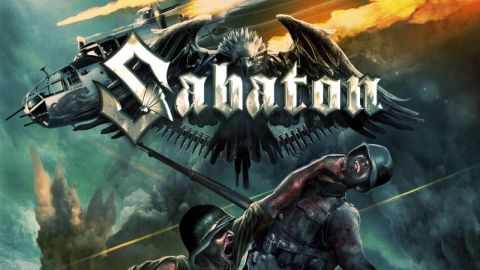 Since the release of 2012’s heroic Carolus Rex Sabaton have pulled a few outlandish stunts that made us go “Errr…?” Racking up the column inches by doing a gig in a gym to an audience of power metal fans on exercise bikes was a bit of eccentric fun but their decision to lose four of their members was a cause for concern.

Heroes, which revisits 20th-century wars and battles for its lyrical influence, is their first album to feature the new lineup with guitarists Chris Rörland and Thobbe Englund and new drummer Hannes van Dahl. While the refresh in personnel hasn’t harmed their steadfast desire to uncover history’s empowering tales of war through some of the best power metal money can buy, they’ve lost their edge by sacrificing their longtime keyboardist Daniel Mÿhr.

Don’t despair, the big choruses rule and the guitar solos are livelier than ever but the cinematic thread that has run through their discography has been disappointedly compensated by unexpected twists and turns like the Western-movie tribute on To Hell And Back and the Jovi-esque stadium fodder on Far From The Fame. Don’t be surprised if Sabaton swap their khakis for leather – it sounds like it’s going that way.