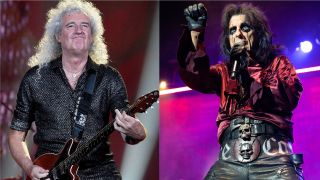 Queen and Adam Lambert, along with Alice Cooper have been confirmed on the bill for the Fire Fight Australia benefit concert next month.

The show will take place at Sydney’s ANZ Stadium on February 16 to raise funds for national bushfire relief efforts, as the country reels from devastating fires that have been sweeping across Australia since September last year.

It had previously been speculated that Queen and Adam Lambert would appear as they’ll play at the stadium the day before as part of their Rhapsody tour.

Last week, artists from across the music world reacted with shock to the spread of the fires, with Aussie rockers Airbourne urging fans to donate if they can to a range of vital services in the country.

Metallica donated A$750,000 to relief efforts, while Parkway Drive started a GoFundMe campaign to raise money to help charities nationwide.

Now Blink-182 have stepped up and are selling specially designed t-shirts to raise cash for charity.

They say: “Australia is being ravaged by deadly fires, and we just feel so helpless. We put out a new merch line and are donating all proceeds to charity. Let's do our part to make sure everyone, the environment, plus all of these kangaroos and koala bears are safe.”

Yoshiki says: “Conservation and sustainability are two of my primary concerns. No matter what country you are from, we are all one planet. This is an issue that concerns everyone, and I hope more people will join this cause.”